Swimmin’ in it: ‘Urinetown’ at Berkeley Playhouse

“When from a long-distant past nothing subsists, after the people are dead, after the things are broken and scattered, still, alone, more fragile, but with more vitality, more unsubstantial, more persistent, more faithful, the smell and taste of things remain poised a long time, like souls, ready to remind us, waiting and hoping for their moment, amid the ruins of all the rest; and bear unfaltering, in the tiny and almost impalpable drop of their essence, the vast structure of recollection.”
– Marcel Proust, In Search of Lost Time (Remembrance of Things Past),
Vol. 1: Swann’s Way (1913)

This was a night of firsts for me. For one, it was my first time seeing a show at the Berkeley Playhouse. I don’t know if the free post-show slices of Extreme Pizza are a regular thing (they’re an official sponsor of the theatre whose ad can be found on the back of the program), but it’s definitely a good incentive to make me come back.

It was also my first time seeing or hearing Urinetown. It wasn’t as if I’d been avoiding Greg Kotis and Mark Hollmann’s meta-musical, but I’d never gotten the opportunity to see it live or listen to its soundtrack, and therefore only know it by reputation (like Hamilton or Cats). Granted, I’d heard good things about the musical, but I’ve been burned before (just look at Orange is the New Black… or better yet, don’t).

So as I stepped in the Julia Morgan Theater – walking through a strange, foggy mist that floated above the seats – knowing nothing more about the show than its title, I counted my lucky stars that the show wasn’t being presented in Smell-O-Vision.

Set by Brian Watson. Photo by me

In our nameless town, everyone has a song in their heart and an infection in their bladder. As we’re told by the square-jawed Officer Lockstock (Matt Davis) and the innocent Little Sally (Brittney Monroe), this was once a thriving town. Now things have gotten so bad that you have to pay to pee. And the man you pay is the evil Mr. Caldwell.

With the unexpected arrival of Caldwell’s would-be successor – his kind-hearted daughter Hope (Andrea J. Love) – and talk of an uprising amongst the townsfolk – lead by the dashing Bobby Strong (Nikita Burshteyn) – nothing will ever be the same. Will these events lead the people closer to a mythical land known only as “Urinetown,” or will their hopes be flushed down the drain?

We start off with a slideshow. It basically serves to deliver a load of backstory that we’ll later get through the songs anyway. I’m guessing Danny Cozart just wanted something happening during the overture. In this case, it’s an excuse for Cozart to inject this 2001 musical with visual cues to contemporary talking points like “fake news”. Low-hanging fruit, yes, but given that this show world-premiered in New York a mere nine days after 9/11, it makes sense that audiences would bring the outside world into the theatre with them.

The musical itself isn’t overtly political so much as it’s reflective of genre tropes. Convention dictates that Big Business is the enemy and The Little Guy is the hero. An oversimplification, but something to think about for any who values profits higher than people. Hollmann and Kotis’ songs are catchy and (mostly) make their point without overstaying their welcome. Although both acts tend to drag a little in the mid-section – particularly Act 2 – I can finally say that I see what people have enjoyed about this show for a decade-and-a-half.

Cozart’s top-notch production doesn’t hurt things either. If anyone is curious about the difference between “community theatre” and “indie theatre,” this is a fine example of the former: elaborate sets; modern equipment; and a loyal audience base. Although my heart forever belongs to indie theatre, there’s something to be said for occasionally enjoying oneself within the safety of conventional theatre, even one that stages such an irreverent show. 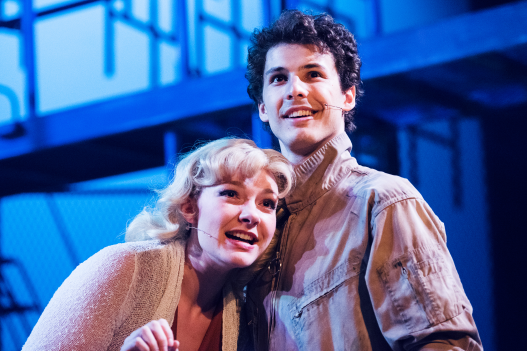 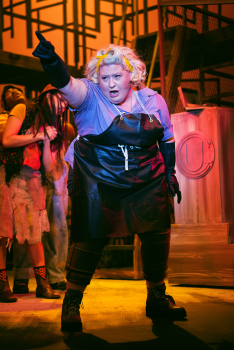 Technically, the show thrives. Brian Watson’s set is simultaneously simple and elaborate. Brittany Mellerson’s lights bounce off it well, and the fact that she favors a distinctive (ahem) “gold” tint on most of the scenes is an inspired choice. Add in a soundtrack from Lyle Barrere and you have an atmosphere that invokes an hilarious take on Fritz Lang’s Metropolis.

With all the cast members seemingly directed to play caricatures, the most I can say is that they do their jobs well. Having acted and sung alongside Jessica Coker before, one doesn’t need me to tell of her scene-stealing prowess, here playing Penelope Pennywise. She has a belt that could drop the roof, if possible. Andrea Love and Nikita Burshteyn are perfectly matched as the show’s hilariously star-crossed lovers, Bobby and Hope. Matt Davis’ large stature, broad shoulders, and thunderous baritone as Officer Lockstock make me wish someone would make a musical version of Dragnet already. I kinda feel that audience surrogate Little Sally is the character that easily could go wrong with a single misstep. Luckily, the plucky-yet-grounded zeal of Brittney Monroe makes her a delight.

Not knowing much about the show, I’m not sure if the flamboyantly Gay characters were written that way or were a directorial choice. They sort of fit into over-the-top nature of the show, but they do become a bit grating. Without spoiling, I will say that the show does seem to take a pro-LGBTQ stance in a later scene, but the other times felt a bit too “drag show” for my taste. I mean, I can forgive the blatant use of stagehands in all black entering and exiting scenes – in fact, I think this show could have done like The Magic’s current Baltimore Waltz and made them full-blown quasi-characters – but the Gay characters were harder to get a bead on.

Again, I won’t spoil the show for those who’ve never seen it, but the ultimate joke is that “Urinetown” is nothing more than a pipe dream, both literally and figuratively. The idea that there’s a simple solution to solving all of one’s problems in one fell swoop is usually what leads people to making rash decisions. Urinetown might not be overtly political, but it’s original opening date shows that it will always be a product of the era in which it’s performed, so long as there are those withholding power from others. Read into that what you will, but the Berkeley Playhouse production is simply an enjoyable time.

Urinetown runs until the 30th of April at the Berkeley Playhouse.
For tickets and information, please visit the production’s official site here.