“Of all the races in the Galaxy, only the English could possibly revive the memory of the most horrific wars ever to sunder the Universe and transform it into what I’m afraid is generally regarded as an incomprehensibly dull and pointless game.”
– Douglas Adams, Life the Universe and Everything (1982)

I decided to use the above quote by it’s from an actual Englishman. I was tempted to go with Raphael’s from the first Ninja Turtles movie (“Ya gotta know what a crumpet is to understand cricket.”), but the above works just as well. There are a great many things we yanks will never adopt: the metric system; universal healthcare; responsibility for our role in a countless stream of atrocities ranging from slavery and the Trail of Tears to the Panama Canal and, well, damn-near everything that fucked up the Middle East. And yes, we’ve also spurned cricket. (We barely tolerate soccer, you honestly think we’ll take to cricket?) 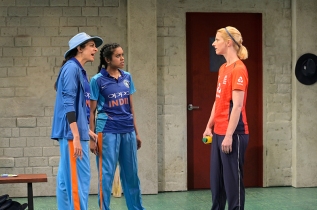 There are no Americans in Testmatch (not seen, anyway), but the inextricable coupling of cricket and colonialism is weaved into every line of Kate Atwell’s new play. Sure, the World Cup players can be opposing teams cordially sharing the same locker room, and they can tell one another that this is just another match at the end of the day, but all it takes is one or two poorly-timed off-color remarks for all pretense to fly out the window.

That’s what makes the top half of Atwell’s play so dynamite when the latter half is so spotty: the former genuinely feels as if we’ve been given fly-on-the-wall access to an experimental fish bowl of boiling social tensions exacerbated by athletic competition. Three British players, three Indian players, all stuck in the same locker room because their World Cup match was stopped for rain. The talk of dating, one of the Brits mentioning her American boyfriend mistook cricket for Quidditch. One of the Indian players, having never experienced JK Rowling’s wizard series, can only think of Bedknobs and Broomsticks, which was set during WWII… which leads to an uncomfortable discussion about England as a world power.

This half of the play is when Atwell is at her best. But this isn’t the only half. 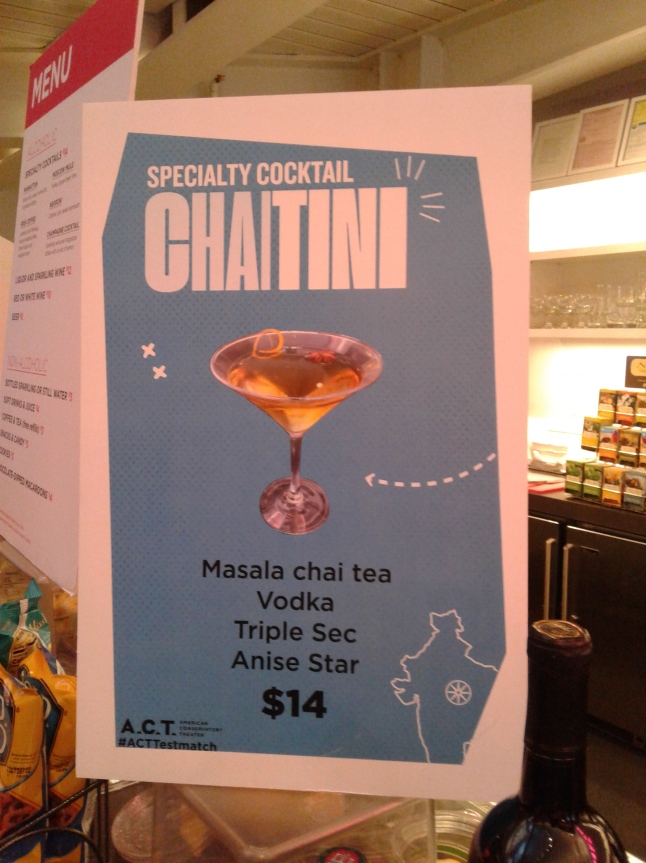 Specialty cocktail. Photo by Me.

The latter half of the play takes a tonal shift so extreme that it almost gave me whiplash. Nina Ball’s wonderfully “lived-in” white-brick locker room set shifts and slides to become the courtyard of a British-occupied stronghold in India. The Brits are powdered-wigged blue bloods with one opium-loving trophy wife, and the Indians – one servant, one a cricketer, one a would-be revolutionary – are told how much they don’t matter. In a way, it reminded me of the time-/tonal-shift of Top Girls (also recently staged by ACT), but in reverse. 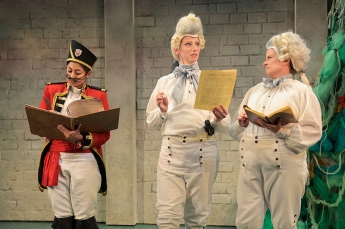 The difference is that I don’t think the outright farcical tone of the latter half works in Testmatch’s favor. Whereas Top Girls drew a clear line of one part leading to the other, Testmatch feels like two different one-acts plays stitched together to make a full-length. It’s easy to see why, as they both cover similar territory, they just don’t quite fit together. And half set in India veers from slapstick to serious drama in a way that felt awkward, whereas the locker room section did it organically.

Still, the direction of ACT Artistic Director Pam MacKinnon keeps the action and staging balanced, even when the feels just the opposite. Revelations, particularly those in the first half (which include a coming out and a revelation about sportsmanship), are presented naturally and jokes land gracefully – even the ones that get very crude (locker room-talk and all). And when a cast that includes Millie Brooks, there are often laughs to be had. In fact, the entire cast does well with tricky material. I’m not familiar with the work of NY-based Lipica Shah or the Bay Area’s own Avanthika Srinivasan, but their roles as the member of the Indian team with a secret and the one with youthful optimism, respectively, were standouts. Watching Meera Rohit Kumbhani and Madeline Wise stare one another down as competing team captains could have been a show unto itself, as could Arwen Anderson as the aforementioned powder-wigged British fool.

Said wigs are the work of costumer Beaver Bauer. Be it competitive poly-cotton or historical corsets, Bauer’s threads blend in without distracting. Marie Yokoyama’s lighting work is subtle at the start, but the transition from time periods is given a nice little flair. Eisheba Ittoop’s sounds are also subtle, but I did notice the consistent sound of rain outside the locker room. Another good technical work on the ACT stage. 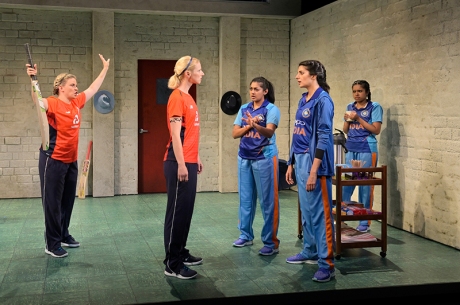 I was once asked, “What’s worse: a work with a lot to say, but can’t say it well, or something put together nice with no real significance?” The fact that those are the only two options show, for my money, a myopic way of thinking. Testmatch is a play with a lot to say about something as seemingly innocuous as sports can carry an historical legacy not always clear. What’s more, it often does it well. It’s just that the bottom half takes itself so seriously that it appears to lose sight of the forest for the trees.

Testmatch is scheduled to run until the 8th of December on the mainstage of ACT’s Strand Theater in San Francisco.
The show runs roughly 90 minutes with no intermission.
For tickets and information, please visit the production’s official site here.