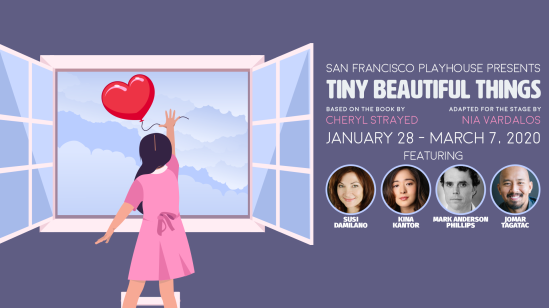 “Be careful whose advice you buy, but be patient with those who supply it. Advice is a form of nostalgia: dispensing it is a way of fishing the past from the disposal, wiping it off, painting over the ugly parts, and recycling it for more than it’s worth. But trust me on the sunscreen.”
– Mary Schmich, “Advice, like youth, probably just wasted on the young.”, Chicago Tribune (1 June 1997)
[Later recycled into Baz Luhrmann’s spoken-word song “Everybody’s Free (To Wear Sunscreen”)]

[NOTE: This play frequently addresses the topic of sexual assault, including incidents in which the victims are minors.]

For the third time in a row now – in less than a week, mind you – I’ve come from a show that was 1 – mercifully short, 2 – relatively spartan, and 3 – obsessed with how life’s “little” moments have the greatest impact. With all three opening at the start of a new year and decade, one in which apocalyptic thoughts are on quite a few minds, it’s tempting to wonder if these shows – each chosen months in advance, one a world premiere – were reflections of those growing anxieties. To the credit of all three shows, they all come to the same conclusion: life is worth living. 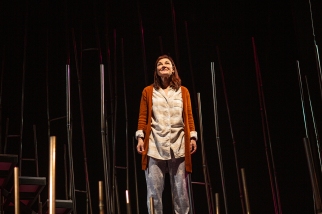 Cheryl Strayed couldn’t have come to that decision easily. Playhouse Artistic Director Bill English (also director of this show) took to the stage before the opening night performance to point out the author herself in attendance. One can only imagine how surreal the experience must have been for her to once again watch the most outlandish and gut-wrenching tales of her advice column tenure brought to life; especially since her responses were often intercut with equally wrenching anecdotes from her personal life. What began as an unpaid time-killer as Strayed finished her book morphed into an exercise that proved therapeutic for both her and her readers.

At least, that’s what we see when our otherwise-nameless protagonist (Playhouse’s Susi Damilano, in another fine performance showcasing her empathy and vulnerability) accepts the opportunity to write for an advice column named “Dear Sugar”. It’s unclear as to what publication (or website) carries the column, so it’s tough to pinpoint the key demographic for the readers. But knowing that likely wouldn’t provide much clarity either. Rest assured that once the deluge of questions begins, it casts a wide net for which neither our columnist nor we the audience are prepared.

But the key to the author’s responses, the success of the play (adapted by Nia Vardalos), and our connection as audience members lies in empathy. The readers of the column (played entirely by Kina Kantor, Mark Phillips, and Jomar Togatac) range from a middle-schooler worried about not fitting in to a Trans man unsure of how to forgive the parents that rejected him. They include married people pondering possible affairs to a sexual assault survivor hesitant to start dating again. The author’s long-winded anecdotes could have easily fallen into the self-serving and narcissistic, but they’re pulled off so well because they’re told from the point-of-view of an elder less eager to make their own voice heard and more willing to listen to those who feel voiceless. She feels this because she finds the sort of emotional point-of-reference that actors are often taught to find for a performance.

So empathetic are her responses that readers immediately sense a different hand behind the pen. In one of the play’s most gripping scenes – of which there are many – she receives a letter from a man (Phillips) whose son was killed by a drunk driver, leading the man to a crippling depression and thoughts of suicide. The predictable thing would be to parrot rote platitudes of “I feel your pain” and “time heals all wounds” and so on. The author doesn’t do that. She reassures his own strength, recognizing that a willingness to speak on one’s pain is the first step toward overcoming it. It’s a beautiful response that must have been agonized over before being sent.

And that’s the most noticeable flaw of the show: how little time it spends on the author crafting her responses. The only real time this is shown is before she sends her very first response, and it makes sense that the play’s expeditious running time is the result of “trimming the fat”, so to speak. Still, the dramatization of each answer – likely transcribed directed from the book and column – as being near-spontaneous takes away some the sincerity. We’re naturally suspicious of someone who has a prepared answer or perfect speech because that person wants to make it all about them. Thankfully, that’s not the case here. Yet, the play would have benefitted all the more by showing the author struggling just a bit more with her replies.

And the show has a lot going for it, that one element notwithstanding. English wisely keeps the staging and characterizations natural. The author first appears carrying a laundry basket before pouring a glass of wine in the kitchen. When the emails and responses arrive, there’s a noticeable distance between her and her readers, the latter often presented in Michael Oesch’s spotlights. As the play goes on, the distance vanishes – so subtly you don’t even notice it – until the readers sitting on the author’s sofa, helping her bag lunches, or sharing in on the wine. None it is literal, but all of it is effective direction. 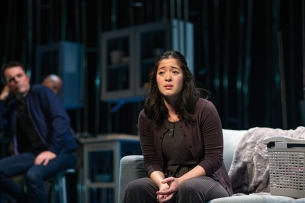 In addition to Damilano’s usual fine work, she’s joined by the equally-reliable Jomar Tagatac. Tagatac has easily become one of the Bay Area’s most reliable performers of the past few years, with fine turns at Cal Shakes and the Playhouse. Here, he brings life to a variety of characters, the standout of which may be his turn as a man emotionally abused by his father. It balances subdued rage with personal pain very well. Relative newcomer Kina Kantor’s roles prove to be mostly comedic, but her standout may be woman afraid to commit to dating again and the woman afraid to move on after the loss of her daughter. It definitely makes one want to see what other kinds of roles Kantor can do. And Mark Phillips’ role as the grieving father is just as touching his role as the profane incel commenter is irritating.

I’m still not sure what to make of Jacquelyn Scott’s set? The entirety is made from what appear to be metal stalks of bamboo, with the furniture pieces all gray or muted tones. (Incidentally, Maggie Whitaker’s costumes are also muted, so nothing really pops on-stage.) It doesn’t appear to hinder the performances – the entire stage is visible at all times – I find myself at a loss as to why that particular “metal bamboo” design.

Though the show is short, the woman next to me was impatient. She stopped watching two or three different times to rub her temples. My first instinct was that she had some sort of medical condition that made her uncomfortable, until she began to scoff at the author’s responses to the readers. When play ended and the lights went down, the woman sarcastically muttered “Thank God!” as she grabbed her jacket. I don’t know this woman, nor do I know her life experience. I don’t know what she has or hasn’t been through to react so scornfully to someone reaching out to help others, but I do hope she has someone with whom she can share her experience.

Thankfully, she was the only I noticed reacting so negatively. The Playhouse’s first show 2020 is a testament to their mission statement, in which their theatre is referred to as an “empathy gym”. Empathy, sympathy, and personal understanding are central to Tiny Beautiful Things. One need only look at contemporary headlines to see the opposite. It’s been a long journey from Cheryl Strayed’s writer’s block to this season-opening show. But the final result proves that it was well worth the journey.

Tiny Little Things is scheduled to run until the 7th of March at the San Francisco Playhouse.
The show runs 90 minutes with no intermission.
Please note that this play frequently addresses the topic of sexual assault, including incidents in which the victims are minors.
For tickets and further information, please visit the production’s official site here.