“When I say ‘My body is mine,’ it is a reminder that the most subversive thing a woman can do is to talk about her life as if it matters – because it does.”
– Mona Eltahawy, TEDx Talk: “My body belongs to Me” (January 2016)

[NOTE: This play’s focus on bodily autonomy includes the depiction of a relationship based on an abuse of power and a disregard for the age of consent.]

Years ago, a female acquaintance was telling me how much she hated, Hated, HATED John Mayer’s chart-topping hit “Your Body is a Wonderland”. By now means was it the first song she’d ever heard that got heavy radio-play as it dehumanized women, but the particular objectification of this song irked her. “He’s presenting himself as some sorta ‘sexual Indiana Jones’,” she said. “Women aren’t people to him; they’re idealized lands to be conquered – like he’s Columbus or something.” 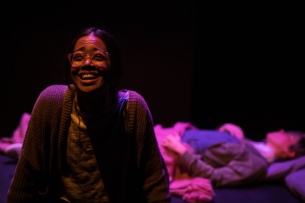 To this day, I don’t think I’ve ever actually hear Mayer’s hit song, nor have I any interest in doing so. But I empathize: in all of human history, has anything under the sun been an painfully scrutinized as the female body? Has any other entity been so fetishized, condemned, and fought over – all at the same time? (Whether by design or serendipity, this show’s premiere followed the San Francisco leg of the anti-abortion “Walk for Life” rally earlier that day. This year’s rally was particularly notable as the Washington D.C rally featured the first attendance by a White House occupant.) The female body is a biological battleground, fought over by men with no regard for its well-being.

The women of Ways to Leave a Body are caught up in that battle. I hesitate to call them “warriors” so much as innocent bystanders. That also feels wrong, as the two characters central of both one-act plays – both played by Eliza Boivin – do have a great level of control over their bodies. That doesn’t negate the fact that these women’s bodies find themselves in situations outside of their control. Watching them battle to regain that control is frustrating to watch because they shouldn’t have to fight for it at all.

(some photos from opening night)

Our first story is Alexa Derman’s “Restoration Master Reset”, which follows Winona (Boivin) and her partner Rhys (Kaitlyn Ortega), a collegiate couple dealing with Winona’s (newly-diagnosed?) Lyme disease. The disease has so overtaken her that it’s as if everyone is talking about her instead of to her. As she self-treats via WebMD and holistic means, Winona’s condition puts an emotional and physical strain on her relationship, particularly in the bedroom.

The second story is “True Romance”, an explicit nod to a film that took idealized romance a new, bullet-ridden level. Our protagonist is known simply as ‘Body’ (Boivin), prisoner to the disembodied ‘Voice’ (Renee Rogoff). A digital clock above a door gives Body 45 minutes to confront that which Voice feels she’s avoiding. This takes Body through the labyrinth of her own memories in the hopes that she come to terms with a Lover (Adam Niemann) with whom she had a one-sided relationship.

Intimacy and a lack thereof play crucial roles in both plays. Also prominent is sensation of an out-of-body experience. Winona, in particular, finds herself such a stranger in her own skin that her proper medical exams with the Expert (Renee Rogoff) allow her to disconnect mentally. (This is directed by Allie Moss with the Expert examining – and Rhys consoling – empty space as Winona wanders all over the stage.) Between her repetitive physical pain, her inability to perform sexually with Rhys, and her ceaseless reading of non-expert medical blogs, Winona is less concerned with getting better and seems more focused on when the pain will stop forever.

That’s obviously something Rhys and the Expert don’t want, but neither is really developed all that much. The play is told entirely from Winona’s perspective, so one can see how they can, at times, appear less as people and more her perceptions of them (including in a dream sequence where the Expert recites a faux-science blog entry to an insomniac Winona). Still, it would have given the other two actors – particularly Kaitlyn Ortega, whose work I don’t recall, but seems underutilized here – something to do beyond act as buffers for Winona’s anxiety (which, admittedly, is par for the course with certain people with illnesses). 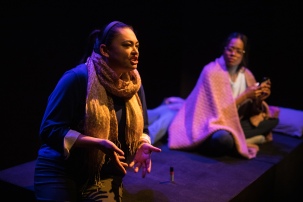 Perkins’ script for “True Romance” gives its characters much more to do, though it isn’t made abundantly clear whether Body or Voice have full sentient control. Part of their dynamic is fighting over that control, but the ultimate revelation of what each represents makes it a bit confounding as to what message is conveyed at the end. Whereas Derman’s script is about accepting help and admitting you can’t do everything on your own, Perkins’ script deals with the necessity of confronting one’s past, but seems to suggest one defer to their younger, immature self as a way of tackling adult anxieties. That sort of coping mechanism brings with it a host of other problems.

Bringing this all together on Adeline Smith’s spartan stage are directors Allie Moss of the ACT, and Cutting Ball’s own Maya Herbsman. Both appear to revel in the dance/movement nature of each piece, as well the “marionette” choreography both employ for Eliza Boivin. Moss often has Boivin in a daze, as if she’s a spirit haunting her own girlfriend, Rhys, even as they appear to be carrying on the same conversation. Herbsman’s direction pivots from overtly balletic – Body and Lover, particularly at the start – to violently erratic when Voice “throws” body back into her chair in front of the door and clock. Boivin definitely seems game for it all. Though her characters don’t appear all that different in terms of personality, she brings a seamlessness to physicality that’s crucial to keeping everything together.

As the other most-used actor in the cast, Renee Rogoff is a delight, even when she’s not on stage. Hers is the first voice we hear as part of an hilariously banal New Age app Winona free-samples to get her body moving. The “lobotomized” voice of the app and encouraging disposition of the Expert are perfectly contrast with the violently aggressive Voice of the second play. Kaitlyn Ortega and Adam Niemann are effective enough in their respective roles as Rhys and Lover, but the characters themselves are pretty thin, despite their importance to their respective plots.

Ways to Leave a Body is at its best illustrating the frustration of that comes with loss of control; the inability to do something so simple that’s now the most trying task in the world. The women dramatized don’t ask for much, but it’s gut-wrenching to watch them be denied it so easily. Where the show stumbles is when it becomes a bit too esoteric for its own good. Such is to be expected from Cutting Ball, but this show occasionally becomes enchanted by its own aethereal staging and seems hard-pressed to refocus.

To its credit, when that focus is held, it’s quite fascinating to watch.

Ways to Leave a Body is scheduled to run until the 9th of February at the EXIT on Taylor in San Francisco.
The show runs 95 minutes with no intermission.
Be advised: This play’s focus on bodily autonomy includes a depiction of a relationship based on an abuse of power and a disregard for the age of consent.
For tickets and further information, please visit the production’s official site here.