We are all Made of Stars: The Inaugural StarCrash at the DNA Lounge

“‘I Feel Love’ is Donna Summer & Giorgio Moroder’s 1977 disco anthem. It’s the song that signaled the beginning of electronic dance music. Its production is almost entirely built on synthesized sound [..] These elements make for a dance track that is hypnotic in its repetition. ‘I Feel Love’ is a song that illustrates just how much disco changed pop music.”
– Estelle Caswell, Vox video essay: “Why Disco made Pop Songs longer” (25 April 2019)

I’ve said it before and I’ll say it again: I never cease to be surprised by my favorite city.

I was never a DNA Lounge patron in my clubbing 20s. Mainly because I tended to stay around downtown or North Beach, but moreso because clubbing just wasn’t my thing. Every time I went, I was eager to leave. Not from any social phobia or anything, I just wasn’t into the idea of sweaty people hopped on X knocking over my drink as I felt my ears go numb from pulsing speakers.

But I am nothing if not supportive of the work of my friends and colleagues. In fact, I’d resolved to up my support for the new year/decade. So, when Sophia Prise – whom I’ve known about ten years now – posted that she would be part of the Lounge’s first-ever line-up for their new monthly synth-pop party, it was the perfect first opportunity to stick to that resolution. I hadn’t even planned on giving the show a proper review since I was there to see a friend perform, but force-of-habit had me bring my notebook along.

Another item I brought was a pair of squishy (foam-ish?) ear plugs I had lying around. In fact, the events of the night made me eager to invest in a decent pair of new ear plugs. (Perhaps EarPeace, EarGasm, or EarDial – any suggestions? Comment below.) The foam-ish pair I had worked fine on a practical level, but the left one didn’t seem to fit and the right one got kinda itchy. As someone who likes to hear the lyrics that go with music, I’m sorry to say that I missed a great portion of then as I kept my eardrums snug.

StarCrash took place in the upper loft area of DNA. (The larger mainstage was putting on a show by international DJ Lucii the Alien.) The loft is intimately-sized. Thankfully, the crowd that night filled the room without choking or cramping. As I ordered the drink of the evening, “The Great Molasses Flood”, I got a look at the above pre-show music and video by Fetz, DNA’s current resident video artist for StarCrash. As someone who remembers the tech evolution of ‘80s PCs to today’s smart phones, I dug Fetz’s simultaneously retro/modern visuals. The images had a Win95 feel to them with contemporary compression artifacts to make the icons “dance” across the screen. His work would pop up throughout the night behind the bands. It did what good accompaniment does, be it visual or audio: it added to the show without becoming a distraction.

Our first act stood alone on stage behind her keyboard, adorned in a black (velvet?) robe and mirrored glasses. She looked like the coolest monk in the temple or an even-more-mysterious Jedi knight. If my memory and clips match the music on her website, she began with a catchy love song called “Shout Through the Void”. The following track was similarly aethereal, but described by its composer as being about “an apocalyptic future”. This was then followed by an upbeat track she described as her “mantra song [..] no matter what poisons are happening in the world.”

As her set progressed (six or so tracks, including one yet-to-be-released), the robe and shades gave way to black leggings beneath a short gray dress with sheer fabric threads extending from her shoulders to her wrists. I’d turned away to take notes between songs, so when I looked up again, I saw a completely different person on stage than the one who began the set. When she stepped from behind the keyboard for a single track, it was less “Jekyll & Hyde” and more like noticing an image that only changes depending on the angle from which its observed.

ContainHer’s work was both mystic and optimistic without being saccharine. It’s too bad I couldn’t hear the lyrics better through my shitty ear plugs, but her ability hold a stage solo without looking consumed by it – especially with the following bands’ equipment already crowding the small area – was nice to watch and made for a good opener to the show.

The next set saw Fetz’s visuals take a break, as performers Host Bodies stuck to pre-set switching of lights that seems to be a staple of their shows. Producer James Collector and guitarist Nick Hess’s website presents their music as soundscape-heavy, as if every track they produce was meant to act as musical wallpaper in your personal Zen space. I’m trying to resolve that online work with the chest-shaking, bass-heavy tracks they dropped at StarCrash. It was as if the Zen dudes on their website got drowned out by their loud next-door neighbors.

I couldn’t identify all the tracks they played, but I do recall that the third one was where Hess really let loose on his guitar. A couple of tracks feature Collector – who outright refuses to let his board hinder him from wildin’ out on stage – grabbing the mic to rap a few verses. One of which I was able to identify as their 2016 “Rift Raft”. But again, it’s hard to resolve the kick-back nature of the recorded version with version I saw that night.

Host Bodies performed as if they had something to prove. In a way, it was an interesting contrast to the relative tranquility of ContainHER, but – and this is all the more apparent after having heard HB’s tracks on their SoundCloud – it occasionally came off as if they wanted their stage presence to be more remembered than their music. The paradox is that they succeeded.

The unofficial headliners of the evening were locals Vice Reine. It wasn’t entirely clear what the band’s role is in the production or promotion of the show, but their logo is featured on a few of the promo cards, they had their own merch table, and it was clear that most of the folks gathered had come to see them specifically. They’re described as “an electroclash synthpop band” specializing in “SF dystopian disco punk” and “future fantasy funk”. Like ya do. Given that lead vocalist Remi X had paint across her eyes reminiscent of Priss from Blade Runner, I guess we know which future dystopia they fancy.

Remi’s vocals remind one of a much-more-high-pitched Debora Iyall of San Francisco’s very own Romeo Void (they did the song that goes “I might like you better if we slept together”) with the music by DJ EJ and CJ DeMarx having a very Knight Rider/Miami Vice-era New Wave feel to it. Remi never tries to belt any of her vocals, but her voice always comes through clearly. It has the benefit of not straining her voice and making the lyrics of the band’s songs easy to understand, even standing close to the stage. Like ContainHER, Remi eventually sheds her first skin – this one being a bright-pink (faux?) fur – for a neon yellow mesh that made her look like one of the gang members chasing Snake Plissken, except cleaner. A lot cleaner.

So devout where the band’s fans that Remi at one point had them sing along. Flanked by EJ and CJ on opposite ends of the stage, her dancing – even from behind her keyboard – made for as well-balanced a visual as it did a crowd motivator, especially with Fetz’s projections once again in the background. The one problem to them milking the crowd the amount that they did was that their set went long. That may also be due to the fact they had some involvement beyond simply performing, but it definitely tipped the scales of the night in their favor more than any other act. They weren’t bad, just clearly taking the largest slice of the night.

I’ll be honest with ya, folks: I won’t be properly reviewing this part, per se. Mainly because, as mentioned above, I’ve known Sophia for almost a decade now. But also because it was tough for me to take notes because I spent of her set doing what everyone else did during the rest of the show: dancing. Maybe it was because I’d had several drinks by then, maybe it’s because the work of someone I know will more likely hit me on an emotional level, or maybe it was because the music (including a brand-new track co-produced with David Earl) so demanded it. Whatever it was, I let myself go during the evening’s closer (featuring Jae Stix on drums and Tom McNalley on guitar).

I have both of her previous albums, so it wasn’t as if I was hearing old favorites with this set (save for “I am Erika”). That didn’t make it any less easy for me to get into it. That was the whole reason I attended the show in the first place. I wanted to enjoy myself with the music of someone I know, and I did that. And I wasn’t the only one. Her songs ranged from spacey to downright psychedelic with trained mezzo vocals floating above them the whole time.

It was worth the wait, is what I’m saying. The only way I’ll be happier is if her new album drops before the end of the year.

As I rushed to catch BART, full of free water and DNA Pizza, I was directed to exit through the main area, where Lucii the Alien’s set was in full swing. Her music didn’t sound bad and everyone seemed to be having a good time, but I had a few flashbacks to miserable, crowded club experiences of my 20s, so I just took a few photos and headed out.

(A collection of badly-angled photos and clips I took that night:) 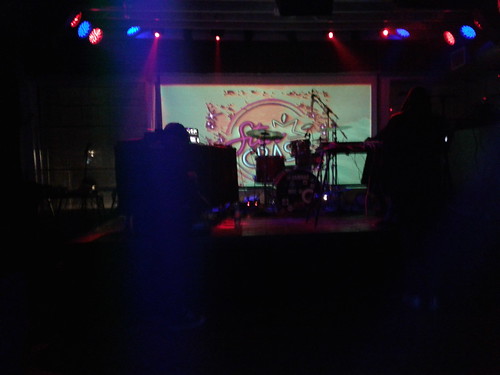 StarCrash wasn’t for world-renowned headliners, it was for local folks with devoted followings sharing the stage and fanbase with similar acts. I love reminders that electronic music, as “automated” as it is, can deliver plenty of emotion and visceral reaction. The show clearly has a few growing pains to get through, but that tends to happen when you try something new.

I’m still not one for clubbing, but I’d definitely consider coming back. Even if I didn’t know anyone on the roster.

StarCrash is scheduled to run every third Thursday in the upper level of the DNA Lounge in San Francisco.
The above show had doors opening at 8pm for an 8:30pm start time.
For up-to-date info on upcoming performers, please visit the show’s official site here.