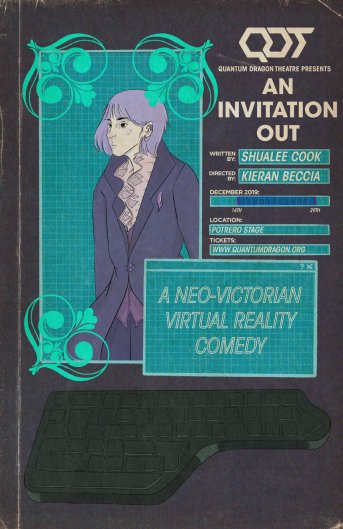 A lot of you reading this will be too young to remember the rise of the video dating service in the ‘80s. You submitted your preferences for potential romantic partners to an agency, which then sent you VHS testimonials from potential partners based on your submitted criteria. Should you like who you saw, you had the potential to go out on a date. (Basically, it was Love Connection from the privacy of your home.) During its lifespan – which lasted well into the mid-2000s – the format was criticized as not being “real dating”. The same criticism was used ten years later with the advent of Internet dating. It came up a decade later with the introduction of sites like OKCupid and proliferation of Craigslist’s “Missed Connections”. It came up yet again this decade with the rise of dating apps like Tindr, Grindr, and the like. 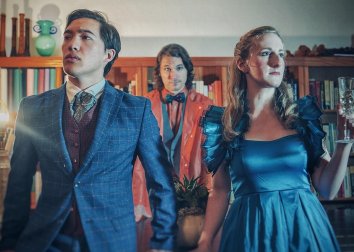 Wridget’s (Will Livingston, center) party for FlyByeNiteSOA (James Aaron Oh, left) and ButtercupEGL (Caitlin Evenson, right) has surprises in stor for all of them. (Photo: Morgan Finley King)

At least some of you will remember the 1999 release of The Matrix. I fucking hated it. I still do. I didn’t need two shitty sequels or a 20-year retrospective to tell me just how shitty the movie is, I knew it then. (That’s why I preferred David Cronenberg’s eXistenZ, released the same month.) I was glad to put The Matrix’s White privilege VR story behind me forever. But with a fourth shitty film on the way, and an alarming number of otherwise intelligent people convinced we live in a simulation, the mediocrity of the original has re-entered the public consciousness.

Both of the above examples, and more, came to mind as I sat through An Invitation Out, Shualee Cook’s satire of the Age of Influencers. To her credit, she’s far more even-handed in her approach than Dave Eggers was with The Circle or how Aaron Sorkin is with, well, any technology created after 1980. I also thought of Five on a Match’s Seen/By Everyone, the Yugen production of which was one of the best shows I saw last year. It would be interesting to see that show paired with this one as part of a rep program. That show is about how social media interprets death; this show is about people whose entire lives are in virtual reality.

That’s not hyperbole: the characters of An Invitation Out have spent the majority of their lives inside a virtual simulation. They apparently do things “the old-fashioned way” to make babies, then they connect the kid once they’ve turned four. This apparently requires the use of a full-body suit, though I don’t recall if any visual component is explicitly mentioned. This was a problem for me as I kept asking the myself questions about details: what’s the restroom situation like; how “tied in” is everyone to the VR world when they seemingly have the ability come and go as they please; who or what has control of this network and how the people have access to it? 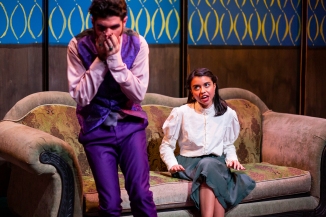 The story proper begins with Wridget creating the avatar for an artificial maid. Naturally, the maid is in a “classic French” uniform. Wridget is complimented on his work by his good friend XLucidenialX, aka “Lucy”, a flamboyant shit-stirrer whose current avatar presents as male, but who teases the other characters about their biological gender. The two are preparing Wridget’s digital space for a party celebrating the digital return of Wridget’s sister, ButtercupEGL, and her husband, FlyByNiteSOA, after they took time off to have a baby. Also expected to attend are Wridget and Buttercup’s aunt, Scandalicious7, and Wridget’s influencer girlfriend, Flutterbye99.

Oh, have I mentioned that the characters don’t have traditional names, just web-handles? The lone exception is Raskin, an “out-dweller” (ie. someone who lives primarily in the real world) and Buttercup’s guest to the party. This inevitably leads to judgmental comments, both from her and to her. Pretty soon, this out-dweller has Wridget reassessing his life, particularly as it pertains to a possible future with Flutterbye99.

If the above seemed challenging to read, I can assure you that it was just as challenging to write, if not moreso. My notes from the show look like shorthand encryption for classified secrets or something – even I had trouble deciphering them for this review, and I wrote ‘em! It’s to the credit of director Kieran Beccia that they keep the action moving at a relatively steady clip, even as Shualee Cook’s script gets weighed down with clichés. 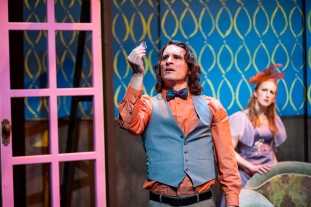 Cook’s text is yet another “losing our humanity in an abundance of technology” tale, but it doesn’t really add anything new to the sub-genre. Chis Hutchinson’s New World Disorder (which got an interesting production by Gritty City Youth Rep in 2017), and TheatreF1rst’s The People’s History of Next (a great show that I’m sorry I didn’t review, and the aforementioned Seen/By Everyone have all tread similar territory, all with an emphasis on social media. Cook’s script never successfully world-builds the way the others do. Sci-fi and fantasy can live or die by their world-building. If you’re stuck asking questions during every major plot point, then the world isn’t on a solid narrative foundation.

But, again, it’s to the credit of Beccia that they work the best elements of the script (which is way too long). I may not have been into the story, but thanks to Beccia and her cast, I really did like all the characters. Will Livingston brings a receptive normalcy to his “straight man” performance of Wridget that works well against the manic personalities of, well, everyone else. Alex Chernow and Emily Dwyer are clearly having a lot of fun in the roles of Lucy and The Maid, respectively. From his first appearance, I knew that Chernow-as-Lucy couldn’t be trusted, but Chernow is wise to keep him likable – that one friend you just know will piss someone off, but you keep them around because they do have good qualities. Probably. 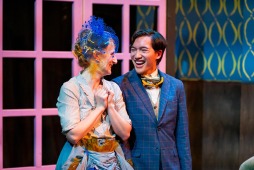 The always-reliable Caitlin Evenson makes Buttercup into a better representation of the “real vs. VR” conflict than Wridget and Raskin (an even-tempered Regina Leon) combined. That’s not a strike against the latter-two actors, but when Buttercup contemplates these things after an intimate moment with her husband (the affable James Aaron Oh), the look on Caitlin’s face says it all. And though I never truly got the sense that Scandalicious7 was as old as we’re told she is, Caroline Portante definitely captures the character’s unearned sense of superiority as she and the vapid Flutterbye99 (an also affable Isabel Langen) discuss the future in their outlandish dresses.

Oh yes, the costuming is something that must be seen to be believed. Kathleen Qiu must have based all of her designs on a box of crayons, which shouldn’t work, but it does. It’s not just the primary color work of Dick Tracy, but everything from Lucy’s initial lavender ensemble to Wridget’s blue booties to Flutter & Scandal’s (head-)dresses smacks of a user given carte blanche in the creation of their avatar. The costumes say more about the concept than the script does. Katie Whitcraft’s set has similar subtle commentary: starting the show covered in painters’ tarps (suggesting a work-in-progress), it soon reveals itself as a fan-made digital environment, with bright pink doorways and an “outdoor” area that, appropriately, resembles a stock photo someone would find in a quick browser search.

Cook’s script doesn’t reinvent the wheel in terms of the “consumed by tech” trope, in fact, its length is proof that it takes itself far too seriously. Having said that, Quantum Dragon found a director with a great sense of timing and a knack for getting the most out of the funniest lines (and there are a great many of those). Between a well-tuned cast and lots of appealing creative choices, the production itself is more a tribute to human ingenuity over the trappings of technology.

An Invitation Out is scheduled to run until the 29th of December at the Potrero Stage in San Francisco.
The show runs roughly 2 hours and 45 minutes with a single 15-min. intermission.
For tickets and information, please visit the production’s official site here.