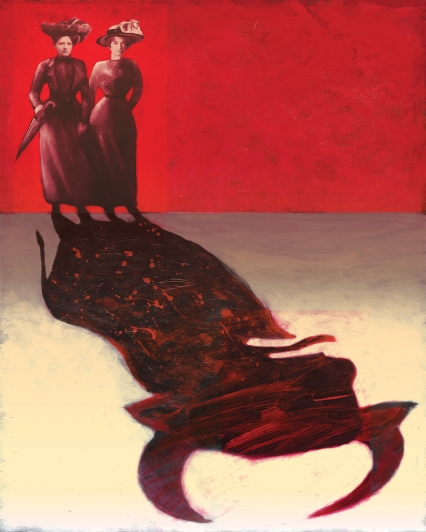 I’ve been thinking lately about Jay-Z’s old song “Moment of Clarity”. After the past few months, it’d be hard not to. Despite having spent the last few years showing a heretofore unexpected political consciousness – most notably his vocal support of Colin Kaepernick – Jay, who once rapped “I’m not a businessman/ I’m a business, man!”, seemed to switch sides and partner with the very football league that was punishing Kaep for taking a stand (or a lack thereof). Jay-Z’s new deal did not go over well. 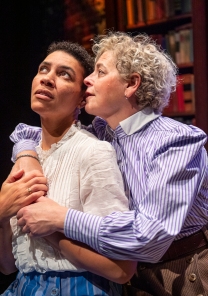 Jeannette (Leontyne Mbele-Mbong) tries to imagine the heights to which Mary’s (Stacy Ross) new position will take them. Photo by David Allen.

Then a funny thing happened. It wasn’t just the fact that the NFL were now offering Kaep the sort of tryout they’d denied him over the last three years. But it was also the knowledge that Jay-Z, using his new NFL partnership as leverage, may have been instrumental in making the tryout happen. Suddenly, everyone who was quick to call him a sellout was ready to praise him for seemingly doing the impossible: he was changing things from the inside. That’s why I thought of the “Moment of Clarity” lyrics:

When your cents got that much in common
And you been hustling since your inception
Fuck perception! Go with what makes sense
Since I know what I’m up against
We as rappers must decide what’s most important
And I can’t help the poor if I’m one of them
So I got rich and gave back, to me that’s the win/win

It’s the conflict that constantly haunts those who believe in The Struggle: is it possible to make a profit without exploiting the people? Can you still be down when you work for The Man? Is it easier to just complain about problems rather than trying to fix them through traditional means? After all, social consciousness and self-interest aren’t mutually exclusive ideas. Why not try them both? 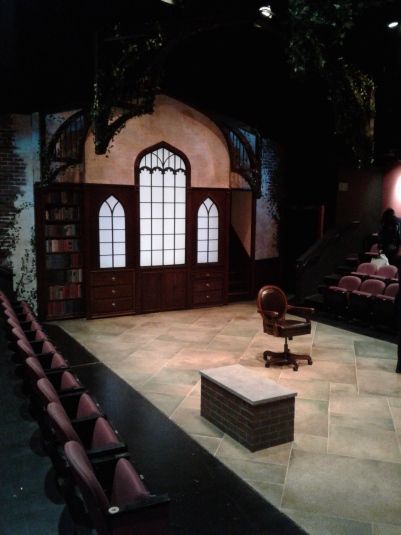 That debate is at the center of Bryna Turner’s dramatic-comedy Bull in a China Shop. Set in the heyday of the Woman’s Suffrage movement, the titular “bull” is gifted scholar and unabashed feminist Mary Woolley (the Bay Area’s own Stacy Ross, turning in another winning performance). Woolley declares herself a bull in the play’s opening dialogue. She knows she’s a shit-stirrer both in- and outside of the classroom. Because (or in spite) of that fierceness, she’s been appointed to president of Mount Holyoke University, with fellow scholar/radical/lover/former student Jeannette Marks (Leontyne Mbele-Mbong) coming with her to take a not-as-glamourous professorship.

Jeannette (Leontyne Mbele-Mbong) tries to keep a professional distance between herself and her student, Pearl (Jasmine Williams). Photo by David Allen

The mere presence of these two unmarried women – who don’t bother to hide their affection – spending all their time together is enough to ruffle the feathers of both Dean Welsh (a barely restrained Mia Tagano) and the deep-pocketed alumni who voice their frustrations through Welsh. It’s also enough to stir up the fighting spirit of fellow professor Felicity (a delightful Rebecca Schweitzer) and the amorous affections of would-be writer Pearl (Jasmine Milan Williams), a student of Jeannette’s whose interests are, shall we say, more than academic.

In fact, Jeannette seems to become more of a thorn in the side of Mary the more prominent Mary becomes. Jeannette fell in love with Mary’s unapologetic radicalism, but feels that Mary is now more an opportunist than a political leader. “We’re a women’s college,” says Mary, “We’re inherently political”. Watching Mary’s influence on Jeannette (in yet another great performance by Leontyne Mbele-Mbong), and then Jeannette to Pearl, is a fascinating study of how no matter how clearly we speak the words, we only have so much control over how they’re interpreted. I doubt Jeannette did anything to inspire Pearl’s infatuation, but I also wonder how much Mary did to inspire Jeannette’s? 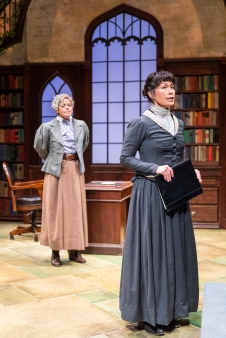 And yes, the debate over what really counts as The Struggle is never far away. Influenced by Jeannette (and Mary’s reputation), Felicity and Pearl are all-too-happy to be arrested at a protest. This despite the strides Mary’s been making, strides of such renown that she’s been invited to lecture in China (and in Germany… for where she hopes to dress down a certain failed artist from Austria). Does Mary’s tenure make her any less righteous because she isn’t in handcuffs? Does Jeannette have to compromise herself in order get that sort of security? The strength of Turner’s script is that it asks these questions without talking down to us.

And the questions are securely asked under the “moderation” of director Dawn Monique Williams. Williams has long been one of Bay Area theatre’s best unsung directors, having helmed projects for both Af-Am Shakes and ACT. But, like many great Bay Area talents, we lost her to less expensive pastures. One can only hope her new position as Aurora’s Associate AD reminds everyone here why her skill is needed.

After all, only a skilled hand would know how to balance that-which-we’ll-call “Pearl’s big scene”. I don’t want to spoil it, but… well… remember that iconic scene from Say Anything? Now, remember how I’ve frequently mentioned that scene in connection with my all-time favorite Onion article? Yeah. With Turner’s words, Williams’ excellent direction, and a pitch-perfect performance by Jasmine Williams, Pearl’s big scene is simultaneously creepy, sad, and very goddamn hilarious! It was the talk of the show opening night, and I expect it will be for the entire run. Rightfully so.

In fact, if I had to nitpick about the production, it would be about the colorblind casting. I’m not entirely sure it works here. In most plays it works fine, and I applaud both the Aurora and Williams (a Black woman) for putting more PoC faces on stage. Having said that, knowing about the Suffrage era sort of draws attention to the PoC present, especially since the (often White) women who led that movement shunned any and all Black women who tried to take part. (Look up the life of Ida B. Wells and see what I mean. In fact, just look up Ida B. Wells, period.) Perhaps Williams was suggesting that very thing with the way Jeannette feels her efforts are being subverted by Mary? It just got an eyebrow raise from me is all.

Equally eye-popping were the technical aspects of the show. I’m sure everyone who reads this site is sick of me praising Nina Ball, but I dare you to take one look at her meticulous library set with its rotating windows and hidden bed, then try and tell me my praise is unfounded. Kurt Landisman once again provides a winning set of lighting cues, subtly shifting from daylight to evening, fulls to spots with simplicity. Lana Palmer’s sounds don’t really jump out at you, but when you notice little moments – a glass breaking in the next room, a room tossed at someone’s window – you hear Palmer’s fine work. And given that Ulises Alcala’s costumes were the talk of the lobby after the show (particularly Leontyne’s pant/skirt ensemble, and all those puffy shoulders), it goes without saying that his threads were a hit.

One of the best epiphanies I ever had as an angry young Black man was the realization that strides of the Civil Right movement didn’t “just” come about because of the work of Martin Luther King. Nor did they come about “just” because of the work of Malcolm X. They both pushed things forward. Using only one method to get what you want may get you temporary results, but those against whom your struggling will soon learn that you’ve only got method and they’ll fight against it. And they’ll win. Real change needs the radicals just as much as it needs the scholars, the registered voters and the public protestors alike. 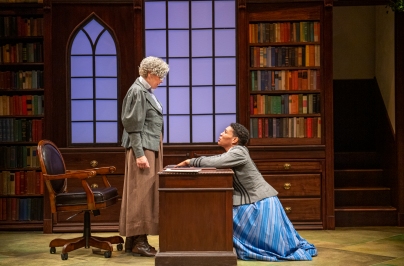 The power dynamic of Mary (Stacy Ross) and Jeanette’s (Leontyne Mbele-Mbong) relationship isn’t what it used to be. Photo by David Allen.

Bull in a China Shop is the story of how one finds that balance and tries to use it for the benefit of all. It’s also a story about how rising through the ranks shouldn’t mean you lose touch with those whose aspirations aren’t that high. Above all, it’s a story by women about how women need to be listened to. Always. Drama, comedy, and feminism make for a great year-ending show in Aurora’s 2019 line-up.

Bull in a China Shop is scheduled to run until the 8th of December on the mainstage of the Aurora Theatre in Berkeley.
The show runs 83 minutes no intermission.
For tickets and information, please visit the production’s official site here.