“I may not be a lady/
But I’m all woman/
From Monday to Sunday, I work harder than you know”
– Lisa Stansfield, “All Woman”

The opening to Caryl Churchill’s Top Girls almost plays like the start of a joke: “A female pope, a Japanese Empress, and a modern (1980s) British business woman all walk into a restaurant. They’re soon joined by other women from history to talk about the myriad ways they’ve been literally and figuratively fucked over.” Indeed, the extended opening scene frequently has the ladies laughing to numb the pain, both physical and psychological. By the time the dinner begins to wind down – talk of bloody revenge can do that to ya – hostess Marlene (Michelle Beck) has gone from toasting the ladies’ success to becoming almost catatonic. 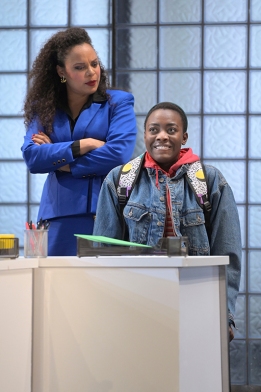 We then hop to the contemporary (again, 1980s) back porch UK setting to find teenage Angie (Gabriella Momah) and her much-younger sidekick Kit (Lily D. Harris), as they partake in that classic adolescent pastime of trying to out-shock one another. When Angie picks up a brick and contemplates killing her mother, you certainly hope she’s just trying to impress Kit.

Finally, we drop into the office where Marlene has just been promoted, much to chagrin of the wife (Monique Adams) whose husband was also up for the role. She actually implores Marlene to give up the position. All of this happens as Angie, Marlene’s niece, watches on, Marlene’s co-workers interview new hires, and Angie herself plots to reunite Marlene and her mother.

Yes, there’s quite a lot going on with the women of Top Girls. And why shouldn’t there be? Hasn’t that always been the case, as shown by our top-hopping dinner guests in the opener? They have to walk on eggshells as men stomp on thin ice without a care. They have to be twice as good to get half as far. Any self-assertion will be taken for over-aggression, and any success is considered anomalous. True, you could say that of all marginalized peoples, but women are the only group marginalized across every race, religion, and nation.

Disclaimer. Photo by Me.

Cocktail menu. Photo by Me.

Themed cocktail. Photo by Me.

Top Girls is another one of “those shows”. One of the ones that I’ve never seen or dead, but is prolific enough that it’s put on by each and every undergrad acting class with at least six women enrolled. It’s not hard to see why: its core characters represent a diverse range of origins and beliefs, making it a good choice for a multi-ethnic cast (or an all-White cast willing to say “race doesn’t matter” without realizing the hypocrisy of choosing this script). Its characters are over-the-top and down-to-Earth. What’s more, it’s a play about examining Feminism in Thatcher-era Britain written by a playwright born during the Women’s Suffrage movement. 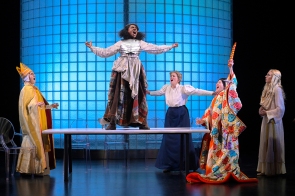 It’s also, for lack of a better term, a “tough” show. I have to tip my hat to director Tamilla Woodard for the way she balances the drama and levity. The story of Pope Joan (Rosie Hallett) in particular goes from jovial to tragic at the turn of a screw, but is done in a way here that feels very organic. The play time with Kit (Lily D. Harris) and Angie (Gabriella Momah, recently of NCTC’s Cardboard Piano) goes from two obnoxious youths trying to gross-out one another to one of them having genuine murderous intent in her eyes. And the final “showdown”, if you will, between Marlene and Joyce ends in something of a stalemate, but still feels like a battle well-fought on both sides.

It’s that final scene, in fact, that drives home the play’s ultimate theme: that a woman is punished for daring to think she can “have it all”. What the hell does “have it all” even mean anymore? What did it mean then? Each and every character who tries to do it all isn’t really rewarded for they’re accomplishments, they’re punished for them. And Woodard’s direction keeps that front-and-center, even when the text is at its most outlandish, or the scenes sometimes become a bit too much to bear. 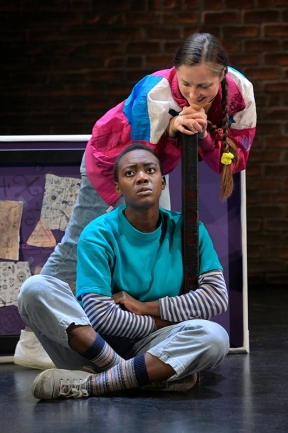 Angie (Gabriella Momah, lower) knows that Kit (Lily Harris, above) is her only friend. Photo by Kevin Berne.

And I’d be remiss not to mention the fine cast, yet I’d be long-winded to try and cover them all individually. I’ll just say that Michelle Beck excellently carries the show as Marlene, even when rocking Sarita Fellows’ appropriately garish ‘80s fashions (I remember my mother wearing similar suits to work – I’ve spent the last 30 years trying to forget). The hypocrisy of Marlene – a vocal proponent of Thatcherism, yet victim to its sexist politics that made her give up something personal – is well-balanced and relatable in Beck’s hands, struggling to be all things to so many people as refuses to apologize for what she’s become. Another standout is the Bay Area’s own Monica Lin – who used to perform under the name Monica Ho – as Japanese Empress Nijo. Lin has always been a reliable performer, and it’s great to still see her on a Bay Area stage when others run for New York or LA. Lin’s Noises Off! co-star Monique Adams is someone who’s always shown promise, but has often been saddled by questionable direction. Her work here as the somewhat-too-Patient Griselda and the frustrated Mrs. Kidd show what kind of promise she has when given the right encouragement.

On the technical side, the set is another winner for the Bay Area’s own Nina Ball. Transforming first from a near-retro-futuristic dining hall to the rear of a tenement building, the set reveals its true secrets in Act II. It’s then that Marlene’s corporate office vanishes and Angie’s home is revealed in a transition so stunning the audience just had to applaud. Barbara Samuels’ lights aid the set well, with the colors of the first set shifts so subtly I had to write it down to make sure I was actually seeing it. Jake Rodriguez’s sounds are subtle, but the scene with Angie and Kit gives him room to play with that subtlety. Good tech work all around. 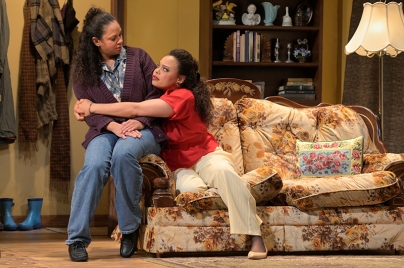 Joyce (Nafeesa Monroe) and Marlene (Michelle Beck) have a lot of catching up to do. Photo by Kevin Berne.

I dare say that Top Girls wasn’t made for me. That’s not a knock against it, but when I did have my problems with it (the ending doesn’t work for me, and as I mentioned above, sometimes the scenes can be a bit much), I kept in mind that it’s not the sort of play to speak on my behalf. That’s why I finally saw it. It’d be nice if I were exposed to new work that both enlightened me whilst backing up my worldview. But, as this play proves, one can’t have it all.

Top Girls is scheduled to run until the 13th of October at the Geary Theater in San Francisco, CA.
The show runs roughly 2 ½ hours with a single 15-min. intermission.
For tickets and information, please visit the production’s official site here.