Watch that Scene: ‘Mamma Mia!’ at the Berkeley Playhouse

Sometimes there really are advantages to having a mediocre first experience. When I saw the film adaptation of Mamma Mia!, it was one of those cases where the result was so awful, I couldn’t possibly understand why it had gotten such acclaim. It joined Phantom of the Opera, August: Osage County (which also starred Meryl Streep), and Rosencrantz & Guildenstern are Dead in the fraternity of popular plays for which the magic is lost on film. 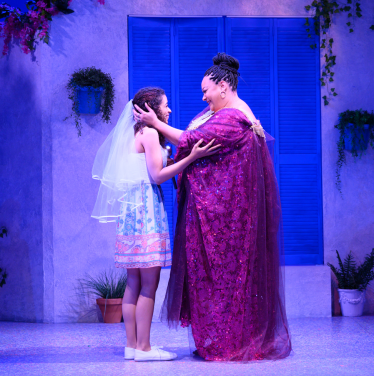 Sophie (Chanel Tilghman) knows that Donna (Katrina McGraw) made her who she is. Photo by Ben Krantz.

That’s all I thought about Mamma Mia! before putting the film out of my mind forever. Besides, if I wanted to see a truly great film set to the music of ABBA, I’d just rewatch Muriel’s Wedding. (Seriously, Muriel’s Wedding is a fantastic film.)

Then it popped up on Berkeley Playhouse’s roster for their 2019 season. No matter how much initial disdain I may have for the source material, I figure I owe it at least a look if it’s staged at the Julia Morgan Theatre. As I’ve come to expect from the Playhouse these last few years: they may not be able to fix any flaws in the text, but their tech and musical work will be such that you likely won’t care after a while.

Besides, the stage version of Mamma Mia! has a charm that the film never did.

Pre-show set by Mark Mendelson. Photo by Me.

Act 2 set by Mark Mendelson. Photo by Me.

The “story” is merely window dressing in a jukebox musical. Still, the one we get here isn’t that hard to grasp: Sophie is getting married on a Greek Island. She’s invited all of her friends, her mother, all of her mother’s friends, seemingly everyone on the island… and three special guests. Y’see, Sophie never met her biological father, whom she’d like to walk her down the aisle. She’s narrowed it down to three possible candidate who all wooed and “Whoo-hoo-hoo!”-ed her mother on this very island 20 years prior. 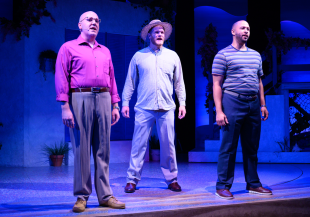 As the three gents arrive, memories flood back, plans go awry, and the entire island seems to know the words to “Dancing Queen”.

Yes, the plot is Sitcom 101, but there’s a reason I still watch old episodes of Frasier and The Golden Girls. Mamma Mia! wasn’t conceived as anything profound or life-changing, it was a means to entertain, plain and simple. And yes, it was targeted at a primarily-female audience. So? The film version not only starred a former James Bond, it came out the same year as one of the lesser Bond films (and out-grossed it). But only the former film’s intended demographic is meant to be dismissed outright.

Mamma Mia! is a show meant to neither challenge, offend, or reshape anyone’s world view. It’s a flimsy excuse to pay tribute to a band its creators love dearly. As far as theatrical premises go, I’ve seen worse. Besides, the songs are as catchy as they were 40 years ago.

There’s a reason the cast followed their bows by having us all join them to sing the encore of “Dancing Queen”.

Sophie Sheridan (Chanel Tilghman) and Sky (Jackson Thea) just want to get married. It’s the simple things that are always so complicated. Photo by Ben Krantz.

And the Playhouse once again picked a good one. I will say that their dedication to color-blind casting (unless the role is specific) led to an… interesting choice this time around. Don’t get me wrong: Katrina McGraw and Chanel Tighman do well as mother Donna and daughter Sophie, respectively. But when Sophie sings “I’m the girl with the golden hair,” one can’t help but raise an eyebrow. But Tighman is fine as a young ingenue. McGraw brings down the house as former-headliner-turned-matron – her shiny sequined suits (great work by Jolie O’Dell) – being the only thing to match her stage presence.

I’m not familiar with the work of Melina Meeng, but she brings a special kind of life to her role as Tanya, one of Donna’s two sidekicks. Meeng owns the role in a way reminiscent of sitcom co-stars who eventually break out on their own. It would take too long to mention the entire cast, but the always-reliable Matt Davis once again shows why he’s a Berkeley Playhouse mainstay.

Mark Mendleson’s set is hiding more secrets than you would expect from first glance. Aided by Chris Lundahl’s lights, the upstage background at first appears to be a European horizon as seen from a window, with “front porch” piece center-stage. Eventually, the centerpiece opens to reveal the entire villa, transform into different rooms within, and even become a discothèque for Sophie’s bachelorette party. All around great work. 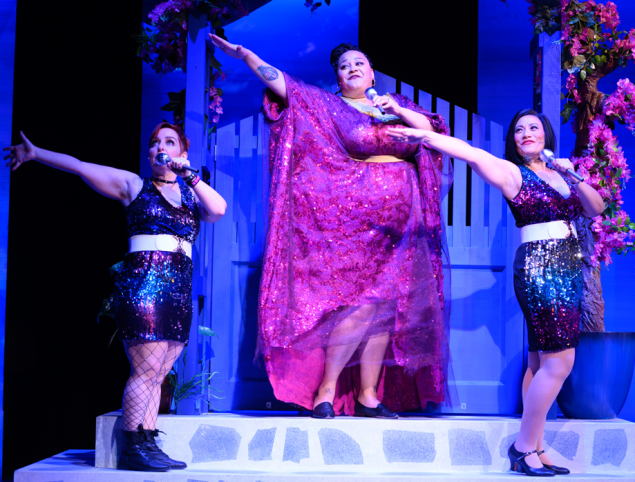 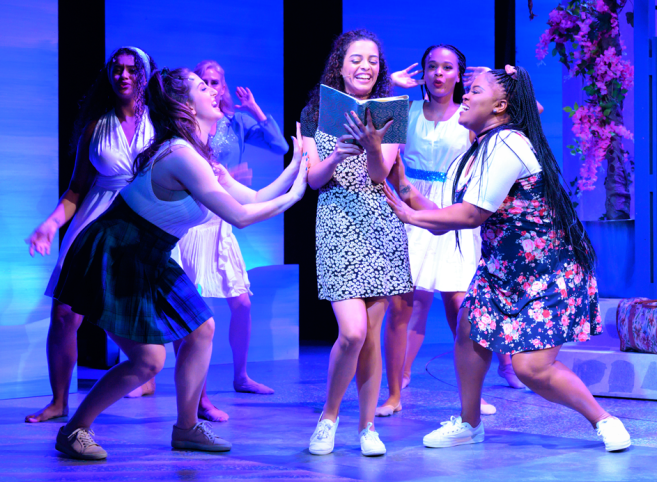 Just like her mother, Sophie Sheridan (Chanel Tilghman, center) has her friends (Claire Noelle Pearson, left, and Jennifer Frazier, right) when she needs them most. Photo by Ben Krantz.

Although I’m not a convert of Mamma Mia!, the Playhouse has definitely made me see its appeal. It’s a show meant to be as escapist and entertaining as the Swedish-borne pop that powers its soundtrack. It’s not about using ABBA’s music for the sake of great character depth (again, that’s what Muriel’s Wedding is for), but it’s a fine way for the Berkeley Playhouse to kick off its latest round of musicals.

Mamma Mia! is scheduled to run until the 20th of October at the Julia Morgan Theatre in Berkeley, CA.
The show runs roughly 2 hours with a single 15-min. intermission.
For tickets and information, please visit the production’s official site here.