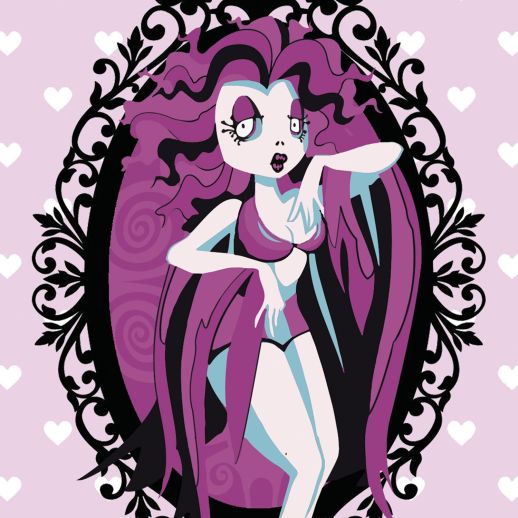 “Everyone’s childhood plays itself out. No wonder no one knows the other or can completely understand.”
– Marilyn Monroe, personal diaries (circa 1958), as collected in Fragments (2010)

There’s no predicting how you’ll react to doing something you meant to do long ago. I’ve been seeing shows at The EXIT since the mid-2000s and performing in them since about 2010, I’ve worked as part of the SF Fringe Festival, and I’ve seen countless shows as part of the (now-defunct?) DIVAfest. Yet, it’s only now that I’ve seen one of their DIVA or Die Burlesque shows. It’s not as if I actively avoided it, I just somehow never got around to seeing the monthly EXIT mainstay that’s come to define the theatre as much as the flowing-haired mural on their traditional cabaret stage.

What’s more, I was diving into the deep end early by seeing not one of their regular shows, but one of their Eric Pape-scripted full-length shows. This wasn’t just going to be a simple feather-fanned dance accompanied by wolf whistles (not knocking those as I love that burlesque as much as the next native-born San Franciscan), this was to be one of DoDB’s shows that carried an active narrative along with its sequined tassels. Mind you, a typical burlesque routine is very narrative, but in a quick, one-joke sense. And as I frequently have the ears of local theatre artists lamenting that they aren’t being taken seriously (especially those in comedy), a burlesque show meant to hold your mental and visual attention is right up my alley.

The ultimate result is a mixed bag, but the bag is easy on the eyes. 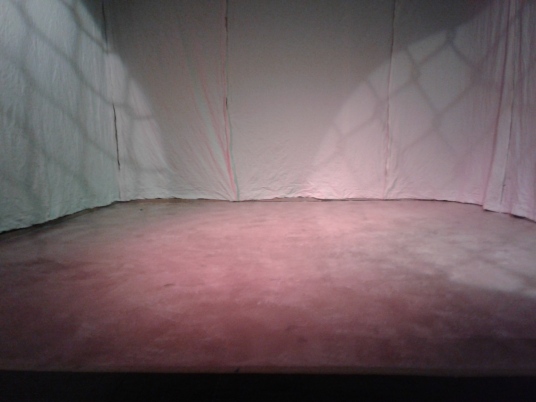 Pre-show set. Photo by Me.

The show opens with three women – clear top-dog Red Velvet, skeptic Lady Malavendra, and the infantile Dee O’s Mio – entering a white room with no doors to a soft piano rendition of “The Sound of Silence”. They wake up with no idea how they got there or who dressed them in babydoll lingerie with frilly high heels. They don’t panic, but they do reflect. With nothing to do but wait and no one to talk to but each other, the ladies reflect on childhood tragedies, parental disappointments, and living up to the expectations of others.

And the whole time, they’re being observed. Who are their observers (The Velvettes)? What’s the purpose of this little experiment? We never get an answer. We do, however, learn a little about what it’s like to be watched and judged all the time as a woman.

Incidentally, this was the second show in a row to have the 3-4 leads wake up in an all-white room where the characters specifically mention the Twilight Zone episode “Five Characters in Search of an Exit”. That show (Shotgun’s production of James Ijames’ Kill Move Paradise) explored Black identity the way Dollhouse Monsters explores feminine identity. The ladies haven’t just been dressed up like babies, but dolls. As in, dressed in a way decided by someone else.

Each one is given a solo number in which they reflect on the individual “monsters” they had to escape before they got to where they were. Red Velvet, despite being a young overachiever, says she was a constant disappointment to her mother because, “I knew I didn’t match anything she wore.” Dee O’s Mio, who got pregnant at a young age, resents the family that loved her young son in a way they never loved her. And a disembodied male voice stops Lady Malavendra from reciting Shakespeare’s As You Like It monologue because they aren’t her words, but her words might not be what you want to hear.

This first-half of the show is simultaneously funny, sad, and sexy. It features talented performers putting on a good show with more depth to it than most pretentious “respectable” works ever hope to pull off. It features a heartbreaking dress scene set to Cyndi Lauper’s “True Colors” and an hilarious rapier battle set to “Battle without Honor or Humanity”. It is great work that proved to me that burlesque can indeed to a full narrative. 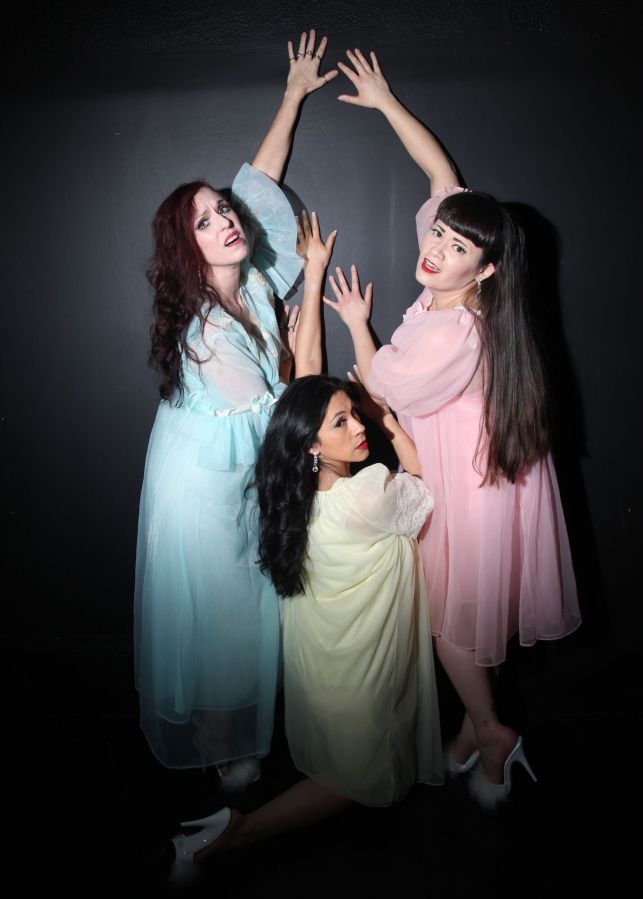 Red Velvet, Dee O’s Mio, and Lady Malavendra in search of a way out. Photo by Ross Pearson

The problem is that most of what’s great about it is in the first-half. The second-half isn’t bad, just not really necessary. Once the story proper was over – done in a way so abrupt several audience members asked me if that was the end or just an intermission – the second-half starts. Nay, the second show starts. From this point until the end, it’s a traditional burlesque show, with sketches about taking a giant pet turtle through the cheese counter at a grocery store, a teacher clarifying consent and bodily autonomy to her students, and a business woman forced to cover up more and more due to male gaze. Also, there’s dragon-faced monster and a dollhouse cover of “Hotel California”. Because of course there is.

Had this been a show unto itself, it would be great. But after a first-half that was over an hour, the sketches push the show to nearly three hours. Some of the musical numbers could have been shortened and some sketches could have been dropped or shortened, putting the show at an easy two hours without compromising anything.

Mind you, I wouldn’t want to cut Lady M singing “With One Look” either, but something had to give.

The simultaneous strength and mistake of Dollhouse Monsters is that it may be too much of a good thing. The narrative show is great, the sketch show is pretty good, but they don’t work together. I imagine the sketch show was added so as to provide relief from the emotional heft of what came before, but it would have been better to leave the audience feeling the impact of what they’d just seen.

The separate halves are like grape jam and mustard: great on their own, but not so good together. Still, I can say this much: this was just my first DIVA or Die show – it certainly won’t be my last.

Dollhouse Monsters is scheduled to run until the 27th of July at the EXIT Theatre’s Stage Left in San Francisco.
The show runs roughly 2 hours and 45 min. with a single 10-min. intermission.
For tickets and information, please visit the production’s official site here.