“There is more than one way to burn a book. And the world is full of people running about with lit matches. Every minority, be it Baptist/Unitarian, Irish/Italian/Octogenarian/Zen Buddhist, Zionist/Seventh-day Adventist, Women’s Lib/Republican, Mattachine/FourSquareGospel feels it has the will, the right, the duty to douse the kerosene, light the fuse. Every dimwit editor who sees himself as the source of all dreary blanc-mange plain porridge unleavened literature, licks his guillotine and eyes the neck of any author who dares to speak above a whisper or write above a nursery rhyme.”
– Ray Bradbury, coda to Fahrenheit 451

The guy in front of me was reading Breitbart.

Due to the raised seating at the Potrero Stage, writing down my pre-show notes gave me a clear view of the guy in the front row reading a website favored by White supremacists. I could even see that he was reading an article about Black people being more prone to crime or some such shit. And that was before the show. During the show – despite us all having been given the same “No Phones” warning heard before every play, film, and funeral – this guy’s wife took out her phone to text during the play.

For the opening night of a play about gullible people easily distracted by screens, these two fit that description to a “T”. In another time, it might be funny.

As someone who’s never read Ray Bradbury’s revered novel – what can I say? It wasn’t assigned to me the way Catcher in the Rye was – nor seen any dramatization, I had the a unusual advantage of going into this production “clean”… sorta. Although I’ve never experienced the story proper, cultural osmosis makes its influence easy to recognize in everything from THX-1138 to The Handmaid’s Tale (which I’ve also never read or seen). So, as I sat in the Potrero Stage taking in Katie Whitcraft’s gigantic wooden set as the speakers played female-sung piano covers of “Mad World” and “House of the Rising Sun” (the latter of which is actually meant to be a woman’s POV), everything was already new but strikingly familiar.

Program and trading card. Photo by Me.

Pre-show set by Katie Whitcraft. Photo by Me. 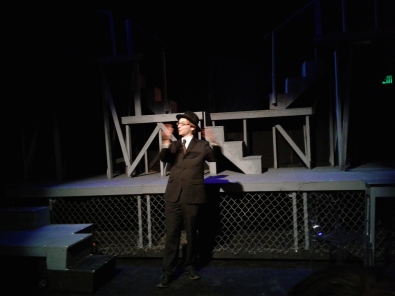 AD/Director Sam Tillis gives the curtain speech in front of Katie Whitcraft’s set. Photo by Me. 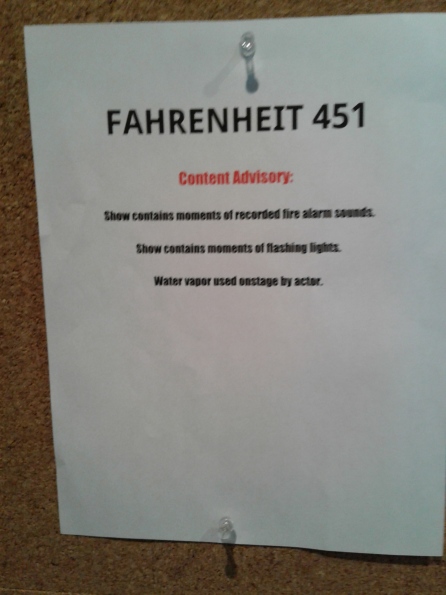 Disclaimer. Photo by Me.

Grudge match. Photo by Me. 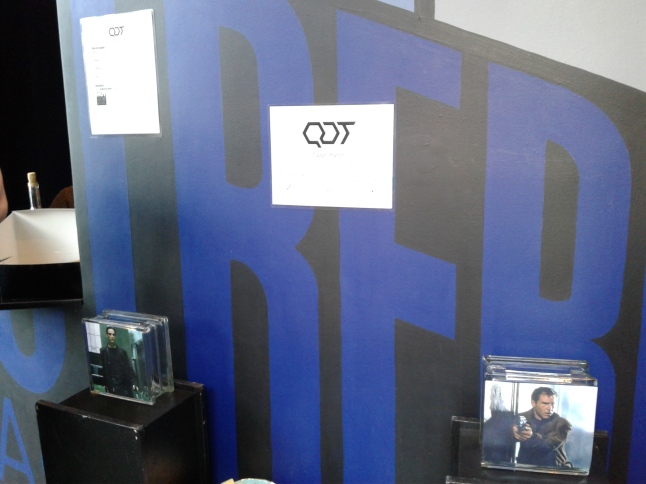 Grudge Match. Photo by Me.

But Montag can’t get over the nagging feeling that something is missing from his life. This feeling takes the form his nosy next-door neighbor Clarisse. She’s an eccentric girl who constantly talks and moves… and reads. It’s her egging on Montag that sets him down a course he never expected to be on. One that has him seeing his marriage, his job, and even the world around him in a whole new light.

Working from Bradbury’s own 1970s theatre adaptation, one can’t help but laugh that the man who saw radio and television as a distraction from books adapted his own book to a visual medium. Looking at it through modern eyes, it definitely contains some classic tropes: the square-jawed hero; the shrewish wife; the proto-Manic Pixie Dream Girl; and so on. I don’t say this to fixate on the story’s flaws, but rather to illustrate that even classic stories have them. Ignoring them would be an injustice to the influence the stories have had, especially since those flaws are still being repeated. The pop of Bradbury’s dialogue shines through (“You say ‘I know,’ you mean ‘shut up’.”), but it’s certainly a work of its time.

That leaves the production itself to stand on its own merits, and that’s where things get a bit awkward. Most of the cast never seem to inhabit their characters, rather they treat them as inherited suits that don’t quite fit. Ron Chapman, in particular, never seems to find a comfortable footing as Montag. Granted, the character’s discomfort with the world and situations around him are crucial to the story, but Chapman is never able to lift Montag into anything more than a series of lines. Emily Corbo faces a similar challenge with the overwrought Millie, but spends a wonderful amount of time silently commenting on the characters and situations in a way the dialogue never really lets her. It actually makes Corbo fascinating to watch. Emily Dwyer similarly does well in lifting Clarisse above the author’s rather myopic views of women. 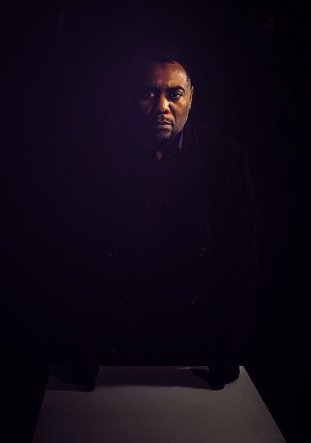 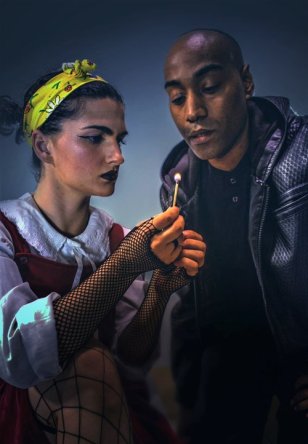 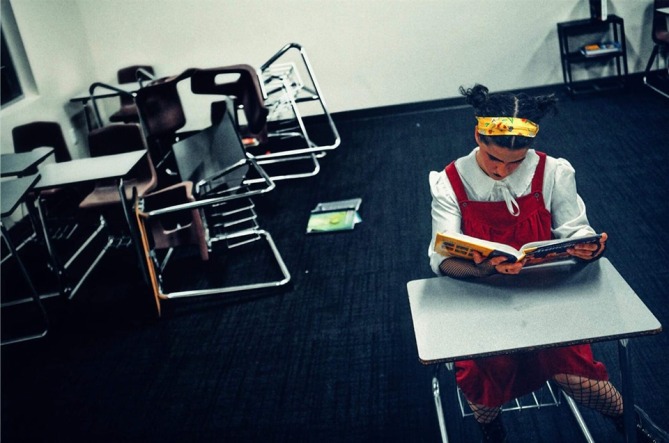 Clarisse (Emily Dwyer) in the one place where she feels safe. Photo by Morgan Finley King 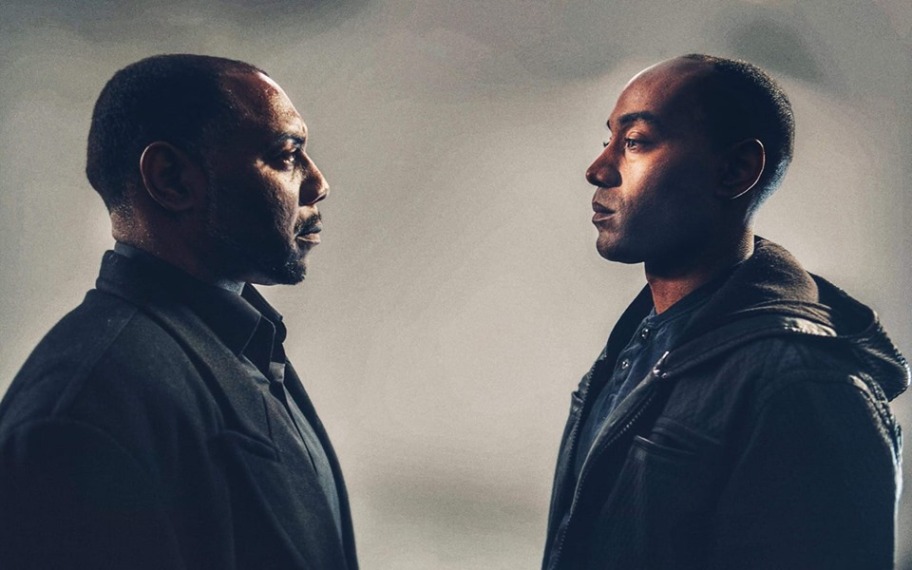 Montag (Ron Chapman) commits the most dangerous crime of all. Photo by Morgan Finley King

Still, as talented as a cast as has been gathered – character-actor Melanie Marshall is clearly having fun slipping in and out of personae alongside James Aaron Oh – we never truly get the feeling anything is at stake. It’s akin to watching talented dancers perform a classic ballet, but although they clearly know the steps, something’s off about the rhythm.

Nevertheless, the technical aspects of the production come incredibly well. As someone who both knows and has worked with Katie Whitcraft before, take my opinion of her set as you will. But I was in the middle of an opening night audience that audibly gasps when this collection of wooden scaffoldings transformed before our eyes. We’d spent the last hour-plus watching it get subtle enhancements (Colin Johnson’s projections, Sara Saavedra’s lights and Colin Johnson’s projections, the latter of which features such Easter eggs as “Bradbury Industries”) and revealing a few hidden-in-plain-sight surprises (bookcases that hang down from the top floor), but the final book-like transformation is something none of us expected and all of us loved.

Having now seen plenty of Quantum Dragon shows, I’ve started to get excited to see what they’ll do in terms of costuming. In addition to her role as Clarisse, Emily Dwyer collaborated with Marisely Cortes to design Fahrenheit’s threads, and they have personality to them. They may not be as attention-grabbing as the 3D-printed pieces of Universal Robots or the matching pieces of The Do’s and Don’ts of Time Travel (also by Dwyer), but the red stripes on the all-black firefighter uniforms say a lot with just a little. From adorning Millie like a 1950s-‘60s housewife to the quasi-hippie commune attire of the finale, Dwyer and Cortes’s costumes tells a story all their own. And I won’t end this review without mentioning the fine sound work by Larry Tasse and the prop-making by Miles Callan.

Millie (Emily Corbo) sees the world as if it were made for her. Photo by Morgan Finley King

Montag (Ron Chapman) is tempted to turn himself in. Photo by Morgan Finley King In the past year, I’ve seen quite a few classic plays that have renewed relevance thanks to the Annoying Orange currently making all our lives miserable. With dangerous lies (Pizzagate) taken as truth and proven truths (the safety & efficacy of vaccines, the dangers of climate change) dismissed as fiction, the Internet Age is the perfect time to revisit Ray Bradbury’s classic. But something feels lost in the translation.

Quantum Dragon’s production is a technical triumph of a modest budget, but it never seems to have a firm grasp on the story it’s trying to tell.

Fahrenheit 451 is scheduled to run until the 7th of July at the Potrero Stage in San Francisco.
The show runs roughly two hours with a single 10-min. intermission.
For tickets and information, please visit the production’s official site here.