“[W]hen you’re famous you kind of run into human nature in a raw kind of way. It stirs up envy, fame does. People you run into feel that, well, who is she who does she think she is, Marilyn Monroe? They feel fame gives them some kind of privilege to walk up to you and say anything to you, you know, of any kind of nature and it won’t hurt your feelings. Like it’s happening to your clothing. One time here I am looking for a home to buy and I stopped at this place. A man came out and was very pleasant and cheerful, and said, ‘Oh, just a moment, I want my wife to meet you.’ Well, she came out and said, ‘Will you please get off the premises?’ You’re always running into people’s unconscious.”
– Marilyn Monroe, “Last Talk with a Lonely Girl”, Life magazine (17 August 1962)

Although Mickey Mouse is often thought of as the quintessential symbol of American animation, I submit that Betty Boop is far more deserving of that distinction. The story of Boop’s creation success fascinates me: originally crated by the Fleischer brothers as an anthropomorphic French poodle, her specific human form owes a lot to (some would say “was plagiarized from”) actress Helen Kane (who, let’s not forget, stole her gimmick from Black singer Baby Esther). Betty was almost toddler-like in her behavior, sexy in her physicality, and Jewish by ethnicity. Very, very Jewish. When the Hollywood’s new production code cracked down on all things “indecent”, it resulted in Betty losing her sexuality and her Jewishness, but keeping her child-like qualities in the mind of an adult woman. If that isn’t the story of an American icon, I don’t know what is?

Marilyn’s life was so defined by what others thought of her that it’s somehow appropriate that her legal name (Norma Jeane Mortensen) doesn’t even appear on her tombstone. Even in death, her remains are meant to pay tribute to the manufactured icon of fame, rather than the girl from Hawthorne. People have spent decades trying to separate her facts from her fiction, trying to find the complex human soul behind the image now owned by the Authentic Brands Group. Norma Jeane died long before Marilyn overdosed. So, as sad as it may be that we’ll never really know what she was thinking, there’s something grotesquely appropriate about her now-copyrighted image living on indefinitely.

Helen of Troy could probably relate. Like Betty and Marilyn, she’s also a fictional character whose identity has been solely defined by what men are feeling. Her name is indicative not of her homeland or parentage, but of where she ultimately ended up. Like Eve in the Garden of Eden and Guinevere in Camelot, her “wandering ways” are held to blame for the loss of greatness. At least, that’s the story every guy likes to tell about her.

Ever wonder what she might have thought? Ellen McLaughlin did. The answer she found raises further questions, but in a good way.

Time has little meaning here. In an unnamed hotel in Egypt, Helen waits. When she entered the hotel, a war had broken out – a war that started in her name. That was nearly 20 years ago. Now, she spends her days not doing the same thing: not eating, not drinking, not really living. 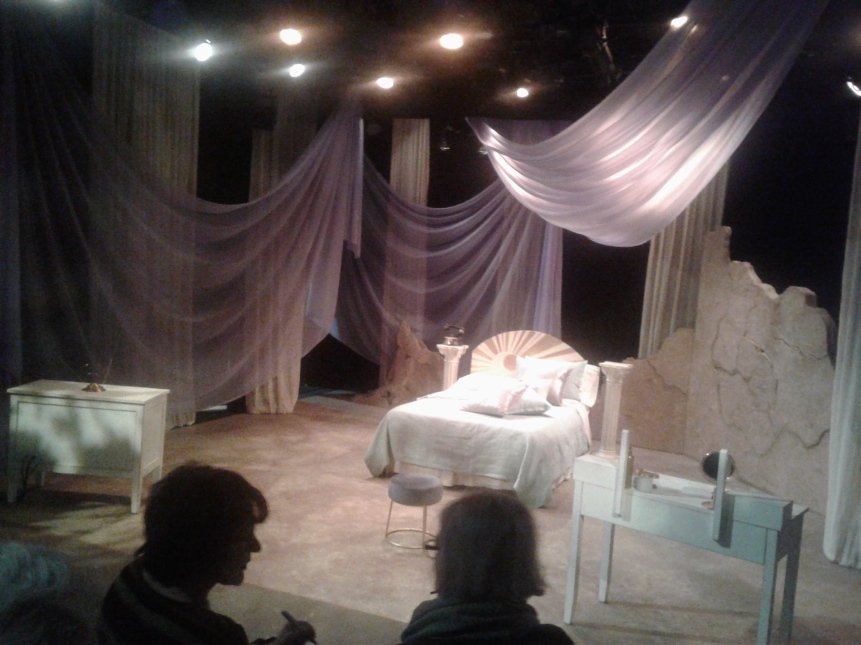 Set by Randy Wong-Westbrooke. Photo by Me. 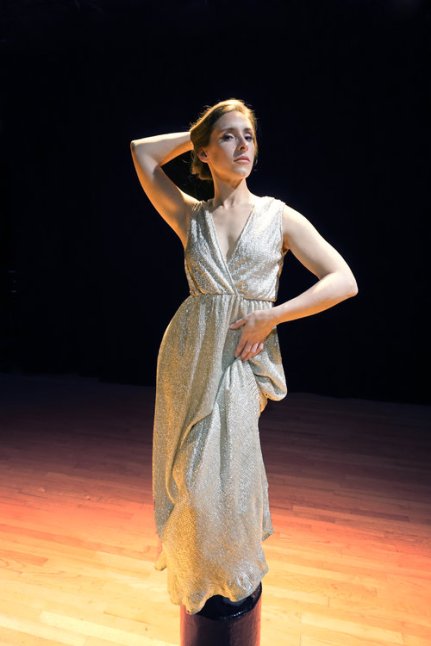 The show opens with the statuesque Helen (Adrian Deane). Photo courtesy of Theatre of Yugen.

There’s a moment in Helen when our eponymous lead is going over her situation as she knows it from her limited vantage point of the hotel room. Suddenly, galloping horses are heard, thunderous noise shakes the room, and Athena (Stefani Potter) bursts into the room, smashing through a stone wall like a war-happy Kool-Aid Man. This section is microcosmic of McLaughlin’s underlying thesis: to break down the calcified mythos around Helen in search of the person within. Athena’s the one who finally gives Helen details about the war. “For me?” Helen asks. “For the idea of you,” Athena responds.

Like the Randy Wong-Westbrooke-designed room she inhabits, Helen seems an antiquated figure out of time. When the lights first come up, she atop an ottoman, posing like a classical statue. Silks hang from the ceiling in such a way that they resemble Greek columns. The phone beside her bed is the sort of corded rotary device you’d expect to see in the mansion of an Old Hollywood starlet – an impression further driven home by the vanity desk where she spends a lot of time adorning herself with her maid’s help. And her television – a giant CRT box with gold or brass rabbit ears – shows nothing but the Weather Channel. Life stopped for her the moment she was whisked away to this hotel, while a doppelgänger took her place.

And oh, the mess the double has made. Everyone has a story about her: the honeypot temptress; the traitorous femme fatale; the nurturing mother figure. Like the soldiers on the shores of Troy, Helen was also at the mercy of the gods, but the difference is that she’s held just as responsible as the gods themselves for all the death and destruction that results from Paris absconding with her from Sparta. But what saves McLoughlin’s script is the fact that there is a level of responsibility which Helen herself refuses to accept.

As we follow Helen (played admirably by Adrian Deane, star of two of the best shows that I saw last year) through her routine of killing flies (a nod to Emily Dickinson?), changing her dress, and making herself up in the mirror, we’re just as surprised by her unexpected guests. Her first guest ever is, we’re told, a cow. It turns out to be Io the once-again-human-with-cow-ears Io (Helen Wu, at her best when conveying the heartbreak of being “ravaged” by Zeus). Like Helen, she’s also spent the entire war lacking info, but that’s because, y’know, she was a cow. The second guest is the aforementioned Athena, who knows all the details of the now-finished war, but confesses that she and her fellow gods just got bored of it after a while. Both of these characters represent the dichotomy of Helen: Io having no choice, Athena capable of making any choice, Helen unable to see where she fits in the middle. 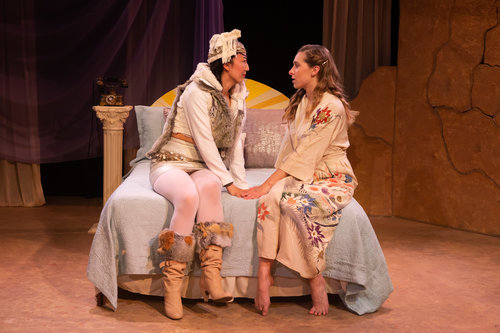 Io (Helen Wu), cow ears and all, is the first guest Helen (Adrian Deane) has had in nearly 20 years. Photo by Devlin Shand 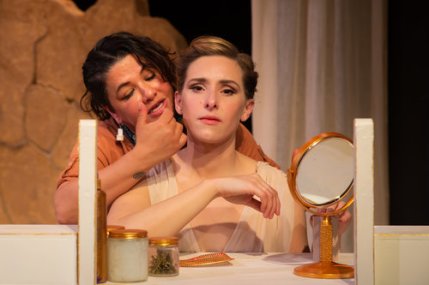 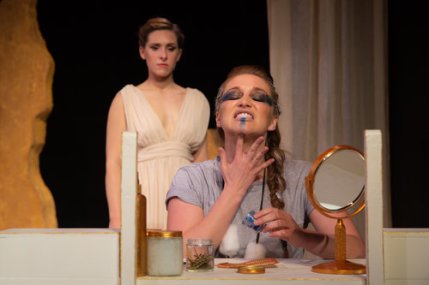 Of all the things Helen (Adrian Deane) expected, a visit from the goddess Athena (Stefani Potter) wasn’t one of them. Photo by Devlin Shand 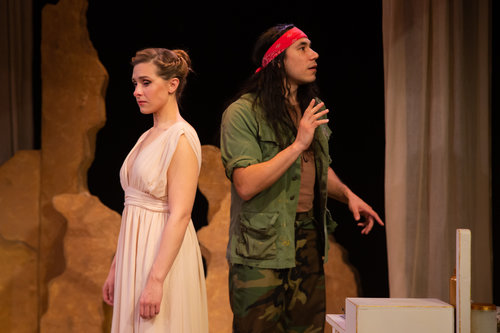 After nearly 20 years, Helen (Adrian Deane) and Menalaus (Steven Flores) are so close, yet so far. Photo by Devlin Shand

Where the play begins to falter is when it leans on these points a bit too hard. After Helen is visited by her estranged husband Menalaus (Steven Flores, whose performance isn’t as strong as that of his co-stars), the idea of Helen taking some semblance of control over her own story is well established. As well as Leticia Duarte plays the unnamed Servant, their final scene goes on a bit too long and simply reestablishes what we’ve already learned. I can see how this scene leads to Helen’s decision at the end of the play, especially when Helen declares her “single achievement” as being that she did nothing wrong. Still, the play feels padded as the end grows closer.

It’s to the credit of Shannon Davis and her crew that the action on stage is watchable throughout. Wong-Westbrooke’s stage is adorned with its classical props by Melissa Ramirez. Ella Cooley’s sounds are often most noticeable during scenes like Athena’s loud entrance and Helen’s out-of-body experiences (both of which deserve equal credit to Miranda Waldron’s lights), but the sounds are also subtly effective with the Dickinson-like buzzing of the flies and the subtle crashing of distant waves as the Servant recounts Helen’s own story to her. Their work all does a fine job of balancing the more “realistic” elements of the production with the supernatural sources of the story.

At one point, Athena tells Helen that what she and the gods love about mortals is that they not only die, but that they’re inherently aware of it like no other species on Earth. They do everything to avoid it and build entire belief systems around it, but are somehow still surprised when it happens. “I’m a story now,” Helen says. “I’ll never die.” Perhaps she won’t, but if we can move beyond the oft-repeated falsehood that Mary Magdalene was a sex worker or that Catherine the Great died from bestiality, surely the time has come to recontextualize Helen.

Though the text goes on too long and not all the performances are even, Yugen’s production is a fine forum in which to debate the reputation of one of classical mythologies most notorious “wicked women”.

Helen is scheduled to run until the 27th of April at the NOHspace in San Francisco.
The show runs roughly 1hr. 50min. with no intermission.
For tickets and information, please visit the production’s official site here.