From the Trailer to Ten Most Wanted: ‘A White Girl’s Guide to International Terrorism’ Sandbox Premiere by San Francisco Playhouse

“We have no skinheads, no real KKK, no one doing anything but talking on the internet. Well someone has to have the bravery to take it to the real world, and I guess that has to be me.”
– The manifesto of Dylann Storm Roof, American White Supremacy terrorist responsible for the Charleston church shooting

You know what I miss about the ‘90s? It’s not the classic episodes of The Simpsons, the Million Man March, or the fact that Mtv was actually worth watching… well, it’s not just all of that. It’s also the fact that the US seemed to come to grips with the fact that a terrorist could be – and often was – someone White. From the IRA to the Unabomber to the nutjobs at Waco, the face of ‘90s terror wasn’t brown or wearing a turban, it was Opie Cunningham with semi-automatic weapons and improvised explosives.

If you have 15min to kill, I’ve added a video at the bottom of this review that covers this very topic. The point is, America’s focus on “terror” all changed one conspicuous September morning in 2001. From that day forward, the US was in a state of denial about the trigger-happy nationalists it was nourishing on its own soil. The alt-Right didn’t appear from a vacuum, it sprung up from the unchecked rage that tells White men they’ve victims and that anyone non-White is a parasite in need of extermination. The same hypocritical policies that Nixon, Hoover, and then-Cal.-governor Reagan used against the Black Power movement in the ‘70s weren’t used against the Timothy McVeighs of the ‘90s or the Dylann Storm Roof’s of the 2010s. It’s a problem that grows worse because the US refuses to take it seriously.

The paradox is that these homegrown terrorists frequently sprout up in the very all-White, low-income residences that most often vote against their own interests (see the spray-tanned draft-dodger they – and Russian hackers – helped put in office). Chelsea Marcantel’s new play is about that sort of danger sprouting up like a weed beneath your favorite flower: you never really notice it until it’s grown too large to easily remove. 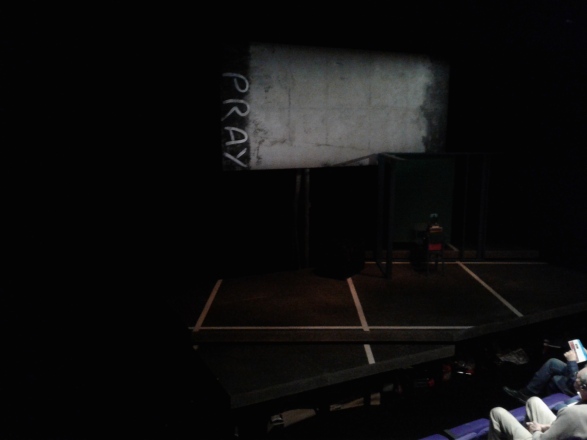 Set by Maya Linke. Photo by Me.

Blaze is drawn to powerful women. So much so that she has her own YouTube show highlighting famous fighting women throughout history, from St. Quiteria to Queen Boudicea. But Blaze’s actual life isn’t anywhere near as exciting. She works a boring job fast food job, lives in a trailer park with her RN mother, and has a limited number of friends that will shrink even further after one inevitably leaves for an out-of-state university. Blaze realizes she may soon live out her greatest fear: going nowhere.

But things begin to change when Blaze records a vlog in which she lashes out at the world. Suddenly, her number of subscribers jumps from 30 to a few thousand and she sharing private messages with a woman who offers Blaze the chance to be part of “a sisterhood”. Suddenly, Blaze’s opportunity to make a genuine change in her life begins to lead her down a path from which there may be no return.

If I give no other compliments to Chelsea Marcantel, let me give this one: she appreciates the value of a good support system in one’s life – particularly that of an adolescent. Like most hormonal teens (my younger self included), Blaze is self-centered without realizing it. An acting teacher once described the mind of the youth as being “Me, me, me!” and that of an adult as “We.” (Some adults having proven otherwise.) This can be good for a youth in that it pushes them to seek independence and define themselves on their own terms. The downside is that they often fail to see the value of familial foundation that supports them every day.

Blaze’s relationship with her mother forms the spine of the story. A double-shift RN, Blaze’s mother Kit doesn’t think much of her daughter’s ambitions or politics (Marcantel wisely side-steps this issue in order to keep the story about human interaction, but a few comments by Kit make it clear that she’s Right-of-Center-leaning), but she doesn’t want to wake up in another 20 years to find Blaze waking up in the same place, ready to stare down the next 20 years. Kit’s life isn’t glamorous, nor her connection with her head-strong daughter all that solid, but a working single mom doesn’t really have time to be. When Blaze is tempted by “Wafiya”, the former looks at it as an opportunity to finally become one of the proud warriors – nay, martyrs – she idolizes.

That brings us to the plays other most subtly important character: Blaze’s BFF Rowena. By all accounts, Rowena seems to be the one most headed for disaster: she has an affinity for bullshit spiritualism she looks up on YouTube; she’s dating Blaze’s adult manager; and she acts on emotional impulse quite often. Yet, it’s her character who proves to be Blaze’s unlikely moral compass. She’s the character who may have been my favorite because her overwrought teenage emotions are so relatable and because Marcantel gives her a number of little touching moments that reveal the real her. 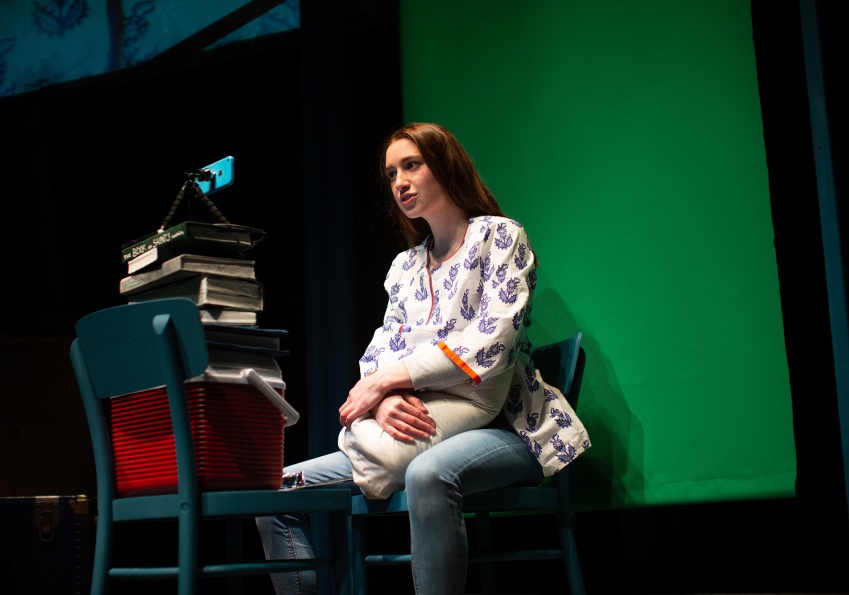 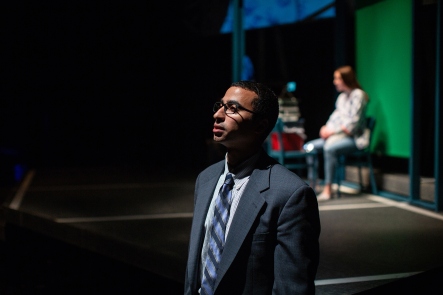 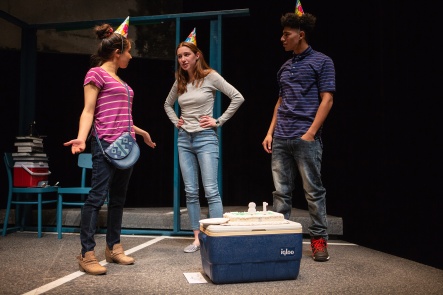 If there’s one character that didn’t quite work for me, it was Agent Salem. Mind you, I understand his purpose in the play – particularly in his knowledge of “Wafiya” and his character contrast from Blaze – I just found his character and scenes distracting from Blaze’s story, which I think should have been the sole point-of-view throughout.

Under the direction of Morgan Green, the production maintains the high standards of the Playhouse’s Sandbox Series. Portraying teens is tough for adults far removed from that age, and portraying teenage girls is too often an excuse for outdated Hollywood stereotypes. Green and Mercantal both seem aware of this, throwing in a prom scene that likely would have been the ending of another story. Here, they portray the prom as what it is: something given more importance than it actually possesses. This is a play explains the world through how women relate to one another (Blaze and the saints, Blaze and Kit, Blaze and Rowena, Blaze and “Wafiya”), so it’s a welcome relief to see the two women in charge of this production approach it with the sensitivity it deserves.

That direction does well in grounding Isabel Langen in the role of Blaze. She’s fine at tapping into that adolescent need to achieve a level of greatness only a larger-than-life hero can attain. This ambition is also countered well by Arwen Anderson as Blaze’s mother Kit. There’s a key scene in which Kit is trying her level best not to escalate an argument with Blaze because Kit is the adult and (we’re often told) should be the calmer of the two, but you can see her patience steadily wearing thin from the strain of being challenged by someone – her daughter – who doesn’t yet know how the world works. Also decent are the play’s two token dudes, Mohammed Shehata and Davied Morales as Agt. Salem and Blaze’s childhood friend/crush Gabe, respectively. Shehata finds himself in a much better production here than last year’s Sandbox trainwreck, In Braunau. Given the play’s acknowledgement of being set in a red state, I have to wonder if the character of Gabe was conceived as White, given how this production avoids any mention of his race in a script that ends hammering home the hypocrisy of White-American terrorists not being treated the same as Arabs. (Hell, it’s the point of the goddamn title.)

And yet, the show is stolen by Neiry Rojo as Rowena. I’m not all that familiar with her work, but her disinterested body language, vocal inflections, and facial expressions all ring true. This is a character that could have easily gone the wrong way, but Rojo’s choices under Green’s direction reveal the character to be the true conscience of the entire show. 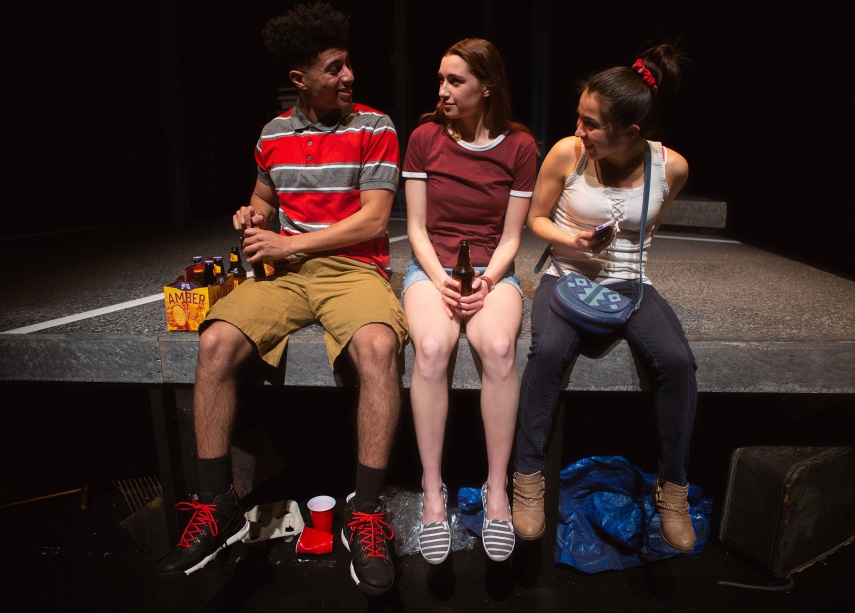 Gabe (Davied Morales), Blaze (Isabel Langen), and Rowena (Neiry Rojo) have been friends since childhood, but graduation may bring that to an end. Photo by Jessica Palopoli.

Kit’s (Arwen Anderson) relationship with her daughter Blaze (Isabel Langen) isn’t as strong as it used to be. Photo by Jessica Palopoli.

And it wouldn’t be an SF Playhouse show – Sandbox or otherwise – without great production design. Though set in Louisiana, Maya Linke’s set seems to purposefully evoke a war-torn Middle Eastern city, the kind on which the Daesh prey. This is most evocative with the brick wall that hangs over the set, often used for Wolfgang Wachalovsky’s projections of Blaze’s YouTube show. (NOTE: the performance I saw suffered from some projection SNAFUs, but it didn’t distract from the performances.) Subtle touches like stacks of books (including The Book of Saints) by prop maestro Stephanie Dittbern further set the scene, with the lower section of the set adorned with used newspapers, wicker rugs, CRT tvs, and so on. Wachalovsky’s lights and Madeline Oldham’s sounds are great at revealing characters “hidden” in places, or at switching from parallel scenes without drawing too much focus. Well done, all around.

It’s been said that “one man’s terrorist is another man’s savior”. Yet, White America has drawn a clear distinction between the two: groups like the Black Panthers are considered Public Enemy No. 1 while “open carry” advocates are considered patriots; George Washington is lauded a hero for defying his British overlords, but Colin Kaepernick is somehow “a traitor” for not wanting to be shot by police; and yes, a White boy can walk into a Black church, shoot everyone inside, and be treated with kid gloves, but Black people will be shot by having their mobile phones mistaken for weapons.

Chelsea Marcantel’s play handles this hypocrisy well… for the most part. It begins to lose focus when it tries to put too fine a point on its intentions. Still, it’s a fine reminder that the US will never win its so-called “wars” against crime and terror so long as it only thinks of people with dark faces as guilty.

The Sandbox Series world premiere of A White Girl’s Guide to International Terrorism ran from 2nd February – 2 March at the Children’s Creativity Museum Theater in Moscone Center in San Francisco.
The show ran roughly two hours with one 10-min. intermission.
For information about the show, please visit the production’s official site here.