“What’s the worst possible thing you can call a woman? Don’t hold back, now. You’re probably thinking of words like ‘slut’, ‘whore’, ‘bitch’, ‘cunt’ (I told you not to hold back!), ‘skank’.
Okay, now what are the worst things you can call a guy? ‘Fag’, ‘girl’, ‘bitch’, ‘pussy’. I’ve even heard the term ‘mangina’.
Notice anything? The worst thing you can call a guy is a girl. Being a woman is the ultimate insult. Now tell me that’s not royally fucked up.”
– Jessica Valenti, Full Frontal Feminism

It doesn’t take much, does it? Brie Larson – the Oscar-winning actress (and Bay Area native) – was in the middle of the press rounds for Captain Marvel – one of the few female-lead big-budget action films in Hollywood history – when she pointed out the fact that the majority of press reps made for a lily-white sausage fest. So, she called for more diversity, including requesting to be interviewed by a disabled woman of color for Marie Claire.

As it is wont to do, the Internet’s White male fragility legion lost its collective shit. I wouldn’t recommend looking up their reactions – rest assured, they’re bad. As in, Bernie-Bro-meets-Donald-Junior bad. As in, angry-that-Wonder–Woman-is-the-only-DC-movie-anyone-likes bad. As in, the-nicest-name-any-of-them-call-Ms.-Larson-is-probably-listed-in-the-Valenti-quote-above bad.

Sadly, this isn’t the least bit surprising. The male ego (particularly that of White men) is as fragile as a house of cards in a hurricane. I’m neither the first to point this out, nor will I be the last. Everyone from Henrik Ibsen to Huey P. Newton has pointed out the hypocrisy of men boasting of their resilience, only to be so easily shaken by the idea of treating a woman as equal. The idea didn’t need the #MeToo movement to become relevant again; that movement was a reaction to the fact that we still haven’t fixed the problem.

August Strindberg was well aware of the problem when he penned this 1880s classic. It’s the classic story of the white-haired conservative picking apart the confidence of his more artistic younger counterpart by degraded said counterpart’s feminine influence, that being the latter’s wife. It’s Shakespeare’s Othello as a chamber play. It’s a still-relevant warning about the dangers of men feeling that the only way to succeed is to destroy someone else. 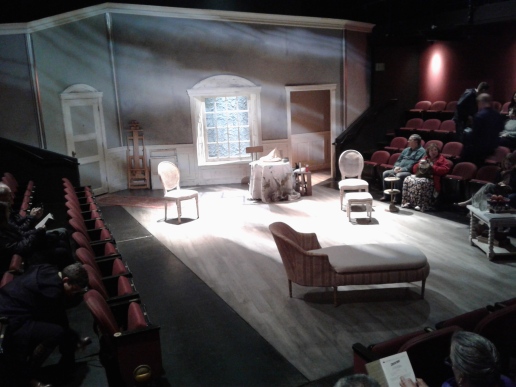 Set by Angrette McClusky. Photo by Me.

Adolph has everything. He’s young, handsome, talented, and experiencing his first wave of success. Add to that the fact that he’s married to the intelligent, beautiful Tekla and Adolph has more than he’d ever asked for. You’d think his elder friend, the academic Gustav, would be happy for him.

Yet, it doesn’t take long for Gustav to question whether Adolph has “earned” his success, and whether his Tekla should be considered a burden rather than a boon. As the day goes by and Gustav probes further, Adolph suddenly finds himself risk of losing everything he holds dear.

Just last month, I finally watched Aaron Sorkin’s Molly’s Game. I tend to avoid Sorkin’s post-Social Network material these days, since – to quote Nathan Rabin – “If left to his devices, Sorkin doesn’t lurch into self-parody; he leaps.” Sure enough, his unchecked sexism and self-congratulatory smugness are on full display throughout the film. When the eponymous Molly asks her lawyer why he’s making his daughter read The Crucible, he snidely replies, “So she can see what happens to a group of bored teenage girls when they gossip.” Oh yeah, forget all that shit about Arthur Miller commenting on McCarthyism and group-think mentality – no, the real problem is an XX-chromosome with loose lips and too much time on her hands.

This is the same absurd rationalization used by Gustav in Creditors. He knows that Adolph is married to a woman who is both intelligent and previously married. As such, Gustav queries, how is one to know for sure if she isn’t just some gold-digger out to hop in bed with the new toast of the town? Adolph should have no room to doubt her affections, but our boy Adolph isn’t the sharpest knife in the drawer. He actually is easily lead by his emotions and susceptible to sweet-talk. If he knows that about himself, why should he trust Tekla at face value? (He only briefly wonders why he should trust Gustav, whom he’s known for only a short time.) 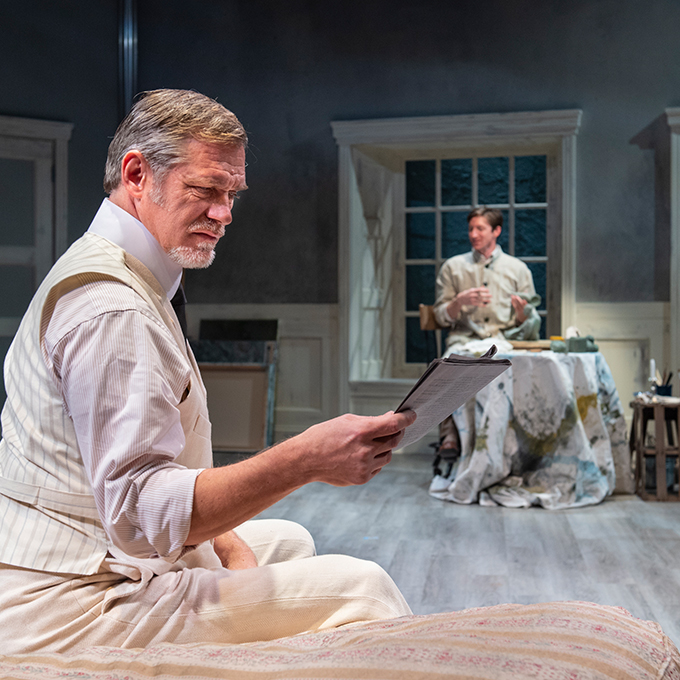 Photo by DavidGustav (Jonathan Rhys Williams) has some specific opinions about the writing of Adolph’s (Joseph Patrick O’Malley) wife. Allen for Aurora Theatre 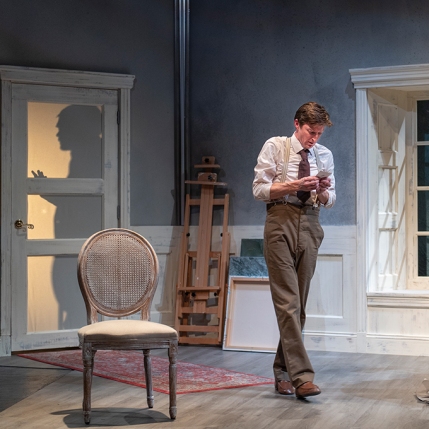 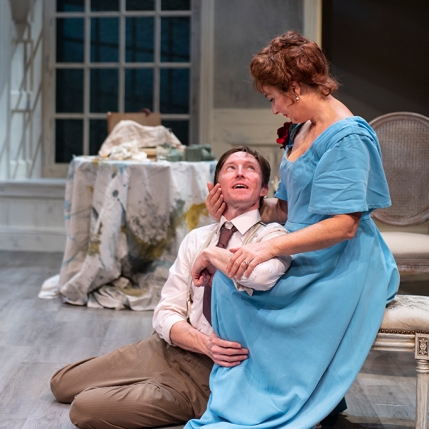 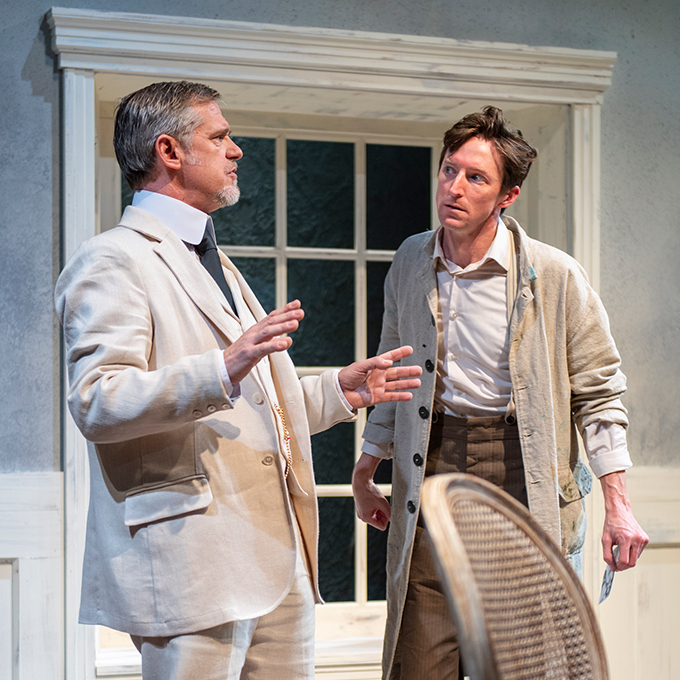 The continued brilliance of Strindberg’s text (newly-translated here by David Greig) is how it not only deftly comments on institutional misogyny, but generation gaps as well. Gustav doesn’t see Adolph as a “real man”, due to the latter’s artistic inclinations. Any of his insults about the “softer” youth could easily be heard today coming from self-styled “preservers of masculinity” like Joe Rogan or Tim Allen. An elder is duty-bound to help a youth discover their fullest potential. Men like Gustav see successive generations as a threat to their way of life rather than an evolution of it. More than a century of social evolution later, these dinosaurs have yet to die off.

And then there’s the fascinating character of Tekla. Such wonderfully complex women weren’t common in Strindberg’s era, so when contemporary Ibsen wrote his play Hedda Gabler, Strindberg was convinced that Ibsen plagiarized him. (Yeah, even “I got to her first” misogyny is as old as time, and Strindberg was as guilty of it as anyone.) Nevertheless, Tekla is no straw woman jezebel, she’s a fully realized human being. She has her out doubts, fears, desires, and ambitions. She has a past, one that comes back to haunt her when she least expects it. In short, this woman – older than her husband – has what he doesn’t yet: a life. She’s travelled, she’s lived, she’s learned. If she’d been born a man, her worldliness would be lauded.

The fact that Gustav not only wants to tear her down but is so easily able to manipulate her husband says more about these insecure men than it does her. And what it says about them isn’t good.

The fact that this is all put on in a top-notch production doesn’t hurt either. Having seen many shows on the Aurora’s main stage, I know how easy it is to ineptly stage something on that thrust. Thankfully, director Barbara Damashek has a keen eye for stage composition combined with fine sense of character motivation. There isn’t a moment when anyone is out of sight, nor Devon LaBelle’s props unseen, but I see in my notes that I was particularly struck by the inevitable meeting of Tekla and Gustav. During a more pleasant part of their conversation, Damashek places them on two different sides of the upstage window. It’s a subtle-but-poignant maneuver that says volumes about how these two characters regard one another.

Speaking of the characters, it almost goes without saying that Rebecca Dines steals the show as Tekla. That’s not to say that Jonathan Williams and Joseph O’Malley are bad, per se, as the manipulative Gustav and manipulated Adolph, respectively. (Though the latter’s voice occasionally broke into an irritating pubescent crack that I couldn’t tell whether it was a choice or a reflex?) It’s just that we spend so much time with these two building up Tekla to such mythic proportions that one can’t help but wonder if the real woman will live up to it. Like Tekla herself, Dines isn’t worried about some man’s description of her so much as her humanity. She imbues Tekla with playful confidence, graceful sexiness, and stunning heartbreak that come from having learned what (and whom) life has to offer. This may be one of the first plays I’ve seen this year, but Dines has already given one of the best performances 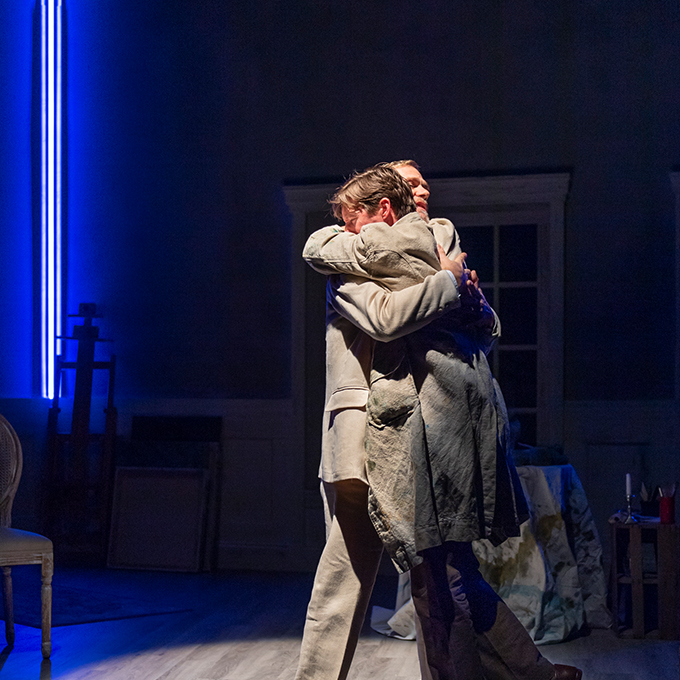 Gustav (Jonathan Rhys Williams) seems to be the only one on whom Adolph (Joseph Patrick O’Malley) can rely. Photo by David Allen for Aurora Theatre 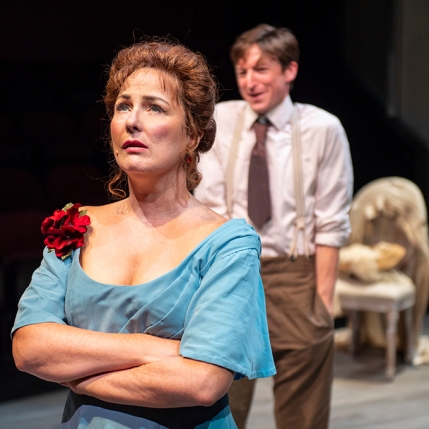 Tekla (Rebecca Dines) has never felt as offended by Adolph (Joseph Patrick O’Malley) as she does now. Photo by David Allen for Aurora Theatre 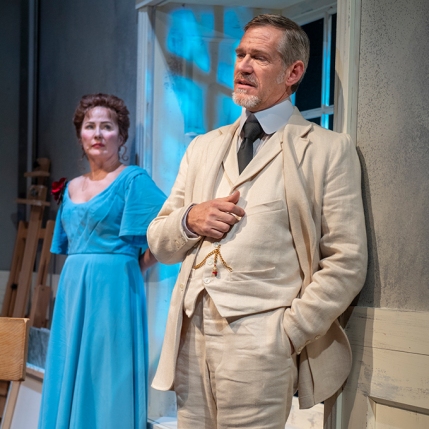 Our action takes place in Angrette McClosky’s lovingly detailed seaside home. Punctuated by Devon LaBelle’s inclusion of artist’s tools and bourgeoisie hors d’œuvres, it’s a lovely Victorian-era equivalent to a Carmel-by-the-Sea getaway spot. Christine Cook’s costumes speak volumes for the characters: Gustav’s conservative three-piece is as all-white and unwavering as his mindset; Adolph’s similarly-colored, but ruffled clothes suggest a similarity between the two which Gustav easily exploits; and Tekla’s sky-blue dress suggests that she may stepped, Venus-like, out of the sea just beyond the walls of the house. I took particular note of the work by sound designer Matt Stines (whose distant ocean ambience creates a wonderful atmosphere) and lighting designer Jim Cave (whose overhead shift in and out of subtle spots without being egregious). Great work, one and all.

I’ll say again that movements like #MeToo aren’t merely new phenomena, but rather the latest backlash to a world that still values an “ideal” form of masculinity that is not only obsolete, but as the video below proves, it wasn’t even real to begin with. The world isn’t in any need to return toxic masculinity being the norm, it needs to finally move forward and accept the fact that women are, y’know, human. Just like men.

I don’t hold my breath for that lesson being learned any time soon, but it’s made for a great production at the Aurora.

The Creditors was extended to run until the 3rd of March on the Main Stage of the Aurora Theatre in Berkeley.
The show runs roughly 1 hour and 45 minutes with no intermission.
For tickets and information, please visit the production’s official site here.