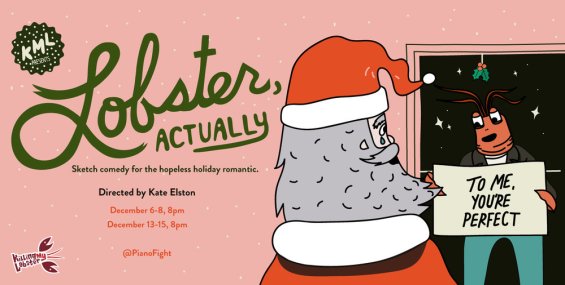 Illustration by Rinee Shaw for Killing My Lobster

“Love, Actually is the Birth of a Nation of rom-coms.”
– Kelly Anneken, via Twitter

Just like Hamilton, Breaking Bad, Doctor Who, and Andrew Lloyd Webber’s Cats, what I know of Love, Actually is by reputation only. Yet, the film is ingrained in the pumpkin-spiced consciousness that I’m sure I could recreate the film scene-for-scene purely based on the parodies I’ve seen. I’ll just do my best impressions of Hugh Grant, Alan Rickman, and what’s-his-name-from-The–Walking–Dead and I’ll be set. (This film also stars Chiwetel Ejiofor, so I guess it has that going for it.)

‘Course, if anybody could simultaneously praise the flick’s “basic bitch” popularity whilst simultaneously tearing it down, it’s the folks at KML. Under the pitch-perfect direction of comedy guru Kate Elston, KML’s latest is a poisoned valentine to the secular holiday of Christmas and the seemingly endless number of romantic comedies set during the season. As someone who worked as an extra on Four Christmases with Vince Vaughn and Reese Witherspoon (yes, really) and whose favorite Xmas flick is Gremlins (a fact that won me the night’s raffle, as seen below), I’m all about setting Santa’s workshop ablaze. 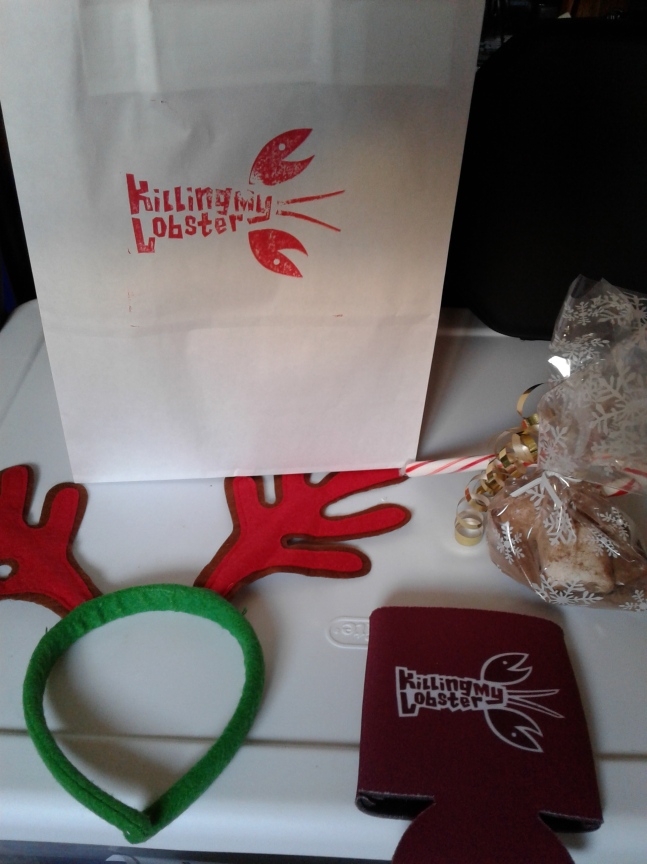 I won the night’s raffle: reindeer antlers, a candy cane, cocoa & marshmellows, and a KML beer cozy. There truly is a Santy Claws. Photo by Me. 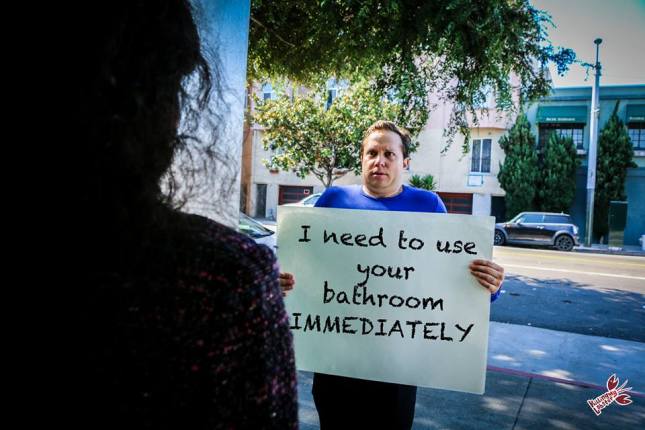 Max Maliga has a holiday message to which all can relate. Photo by Rebecca Hodges.

With a strong 20 sketches with which to work, Elston and her writers (led by Karl Keily) hilariously nitpick the holiday movie genre from the point-of-view of someone who’s chosen to veg out in front of the tube, so as not to interact with family. It’s a feeling I know well.

This ranges from a Christmas shopper (Alsa Bruno) mistaking his mugger (Elaine Gavin) for his “Meet Cute” intended love to a bartender (Maro Guevara) whose establishment is visited by a score of movie dads looking to get away to a running joke where the Fast and the Furious franchise turns to Xmas movies as a means of prolonging its overstayed welcome. There’s a Frenchman in a silk robe (Guevara) shilling Moët’s “Buttload of Champagne” (sold in a bottle the size of a moonshine jug – with the same apparent potency) and a couple of millennials in ugly sweaters (Jenny Nelso and Max Maliga) whose hate-watch of It’s a Wonderful Life soon takes turn for the sincere. Possibly my favorite sketch of the night was “The Chanukah Channel”, which – lacking the extensive catalogue of its goyim counterparts – just plays The Hebrew Hammer and Eight Crazy Nights on repeat.

And when not skewering the holiday, the show takes plenty of shots at its namesake film and the genre to which it belongs. The opening sketch – which probably would have worked better on me had I seen the goddamn film – revolves around two detectives (Nelson and Gavin) attempting to untangle the complicated web that is the films’ interlocking relationships. Later on, Nelson takes on the persona of a bored Staples dealing with an endless stream of unhealthy stalkers romantic men looking for cue cards and markers. Later still, Nelson becomes the meek employee at the office Xmas party going through the very disastrous do’s and don’ts of the evening.

Yet, the It’s a Wonderful Life sketch stands out because I think it represents the show’s underlying thesis: finding something about the season to enjoy, even if it’s something you (think you) hate. Whereas someone like Kirk Cameron or Tucker Carlson would trumpet the name of Christ whilst paradoxically promoting the very seasonal consumerism Christ would abhor, KML’s show is about acknowledging the pain of the forced happiness of the season, but replacing it with something you genuinely do enjoy. When the weakest sketch is a New Year’s piece about literal balls dropping, it shows just how well these folks know how to use an hour. 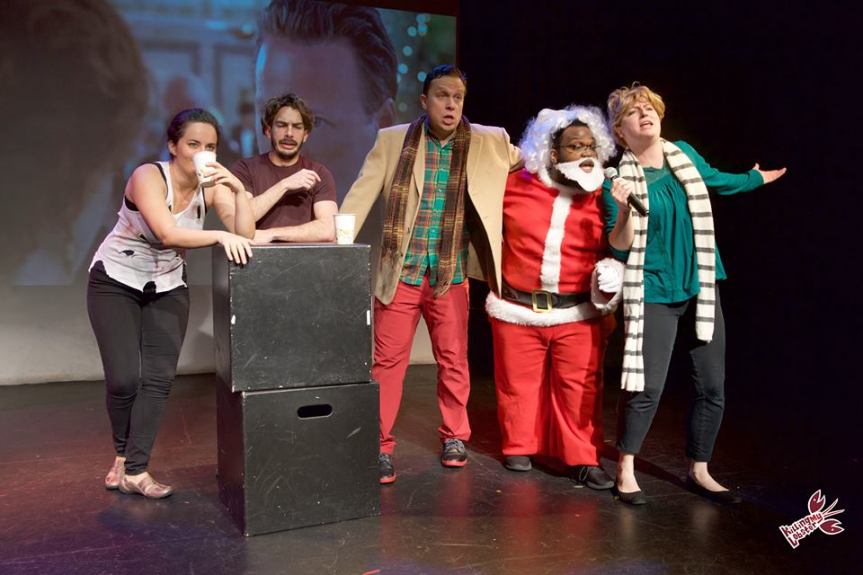 One bartender (Maro Guevara, second-from-left) wasn’t prepared for so many holiday dads (Alissa Sanchez, Max Maliga, Alsa Bruno, Elaine Gavin) to show up all at once. Photo by Matthew Davis. 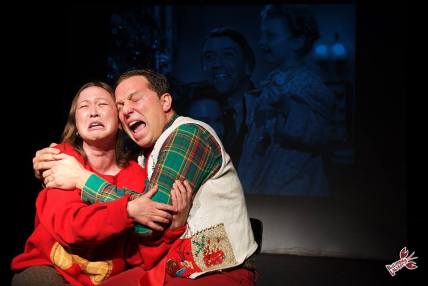 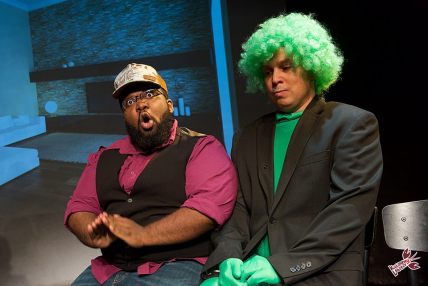 The boys from ‘Queer Eye’ (Alsa Bruno) set their sights on The Grinch (Max Maliga). Photo by Matthew Davis.

Kevin McCallister (Max Maliga) wants to set the record straight about that movie based on his life. Photo by Matthew Davis.

What’s more, this final 2018 show is exemplary of how well KML has shaken up their casting choices in the past 12 months. Alsa Bruno’s bio in the program describes him as “painfully shy,” but you’d never know that from the way blasts through the sketches here. His appearance as Wanya Morris of Boyz II Men alone worth seeing the show. KML vets Max Maliga and Elaine Gavin are hilarious as one would expect. The fact that Maliga can do an Arnold Schwarzenegger impression that doesn’t make me want to stab my own ears is impressive; and Gavin’s scene-stealing appearance as a mom trapped in an airport is great at making the most of a few lines.

Having worked with Maro Guevara before, I wasn’t surprised to see his great comedic timing. But not even I was prepared for his Wisconsin-accented patriarch or Pepe le Pew-esque champagne shill. Newcomer Alissa Sanchez seemed to be in the fewest sketches (so much as I consciously counted), but her chemistry with Gavin is top-notch. The piece where the two of them fight over the same toy is one of the highlights of the night. Fellow newcomer Jenny Nelson shows a wonderfully wide range, bouncing from hard-nosed detective to obnoxious millennial to meek office work with ease.

Add in scripts by KML vets (Allison Page, Molly “Fuckin’” Sanchez, Meg Trowbridge, and the Bardis, amongst others), then you have 20 sketches and two musical numbers that make an excellent excuse for you to get away from you own family one cold December evening.

Also, the show is stage-managed by someone named Emma McCool, which is the coolest human name since “Powers Boothe”.

Lobster, Actually is scheduled to run until the 15th of December at PianoFight in San Francisco.
The show runs roughly one hour with no intermission.
For tickets and information, please visit the production’s official site here.