Bud Fox: “What about hard work?”
Gordon Gekko: “What about it? You work hard? I bet you stayed up all night analyzing that dog-shit stock you gave me – where did it get you? My father – he worked like an elephant pushin’ electrical supplies ‘til he dropped dead at 49 with a heart attack and tax bills. Wake up, will ya, pal?”
– Wall Street, written by Stanley Weiser and Oliver Stone (1987)

The old White couple sitting behind me had never heard of Lynn Nottage. As they finally settled into their seats, the man kept throwing out dismissive descriptors of the Pulitzer-winning playwright as “apparently some big to-do right now,” (I had to write that shit down to make sure I heard it correctly) with the woman occasionally tossing in a simple “Oh, I see” to acknowledge his rambling. I found their conversation just mildly annoying, whereas I found the show’s pre-show ‘90s playlist (Third Eye Blind’s “Semi-Charmed Life”, Ginuwine’s “Pony”, Santana’s ’71 classic “Oye Como Va”) full of bewildering choices to precede a play set in the 2000s.  Besides, if this couple really wanted to get to know Lynn Nottage, they could have just met her in the lobby before the show.

I never expected to attend the 1st-tier theatre opening of a Lynn Nottage play, let alone a premiere in which the playwright herself was in attendance. The author showed up at the ACT last night with her signature dreads in a primary-red headwrap that matched her poofy red pants. So too did her black suede heels match her knitted black top. With giant hoop earrings to complete the ensemble, she looked as if she’d just come back from an Ebony photoshoot.

I resisted all temptations to introduce myself, no matter how much I admired both her and her work. Whenever I have an opening night, I just want to be alone and will often run around the theatre just to have something to do. In any case, she wouldn’t have been dying to know my opinion about the play afterward. And if she had, she wouldn’t have like my answer anyway.

Table in the ACT lounge. Photo by Me.

Photo in the ACT lounge. Photo by Me.

Date markers in the ACT lounge. Photo by Me.

Bar display in the ACT lounge. Photo by Me.

America looked different in 2000. With the Clinton years ending and a new millennium beginning, the town of Reading, PA seems truly seems stuck in another century. One way or another, everyone makes their living from the town’s largest factory. Their parents worked there, their grandparents worked there, even the local bar’ clientele are all factory employees. As far back as anyone can remember, their lives have been about the factory; nothing has changed.

But things are about to change. Cynthia, a Black woman who’s spent her life on the assembly line, has her eye on a new position in management. Similarly, her son Chris plans to leave the line to pursue higher education. You’d expect their White best friends, Tracey and Jason, to be happy for them. Such is not the case. With union negotiations looming for a company looking to cut overhead, everyone’s well-intentioned choices soon have unforeseen repercussions.

I almost titled this review “Eight Years Out of Power,” a play on Ta-Nehisi Coates’ recent collection of essays. I chose not to because, despite the play taking place in 2000 and 2008 (with the respective elections of Bush and Obama playing in the background), greater politics play no role in the story. There are only two direct mentions of the 2000 election, both incredibly brief and both by Stan the bartender, who considers voting a useless exercise in a two-party system. They serve less as thematic elements and more as timestamps, which makes the dialogue a bit redundant when we see actual timestamps projected on the stage. Even when Nottage’s characters directly address such well-worn political tropes as “a return to the good old days” (Tracey tearfully reminisces about her wood craftsman grandfather), it doesn’t give any indication about the characters’ voting habits.

Still, that speech touches well upon the American fetish of working oneself to death. In fact, Nottage’s script works best when it becomes a story of class struggle. When Cynthia and Chris find opportunities for upward mobility, Tracey and Jason have no reason to be as personally offended as they are. Though the latter both insist they aren’t racist, they do everything short of calling their Black friends “uppity”. (Incidentally, I attended this play wearing my “uppity” shirt.) Even when Oscar, Stan Latino barback, gets hired at the factory as a scab, Tracey and Jason are unable to hold back their racism, with Jason calling Oscar a “spic”. Had the play been entirely about these sort of gray areas – with the racism removed, Tracey and Jason still feel hurt that lifelong friends are moving on without them – I’d understand why it won the Pulitzer. Speeches like the one about Tracey’s grandfather illustrate why the US still suffers under the delusion that hard work alone will lead to success, meanwhile people work three jobs to barely pay the bills. Cynthia representing the otherwise-faceless suits that want to downsize the factory is where they play has real power.

Brucie (Chiké Johnson) tells Stan (Rod Gnapp) about his bad luck, which may soon get worse. Photo by Kevin Berne. 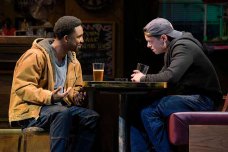 Chris (Kadeem Ali Harris) and Jason (David Darrow) have a solid friendship, but different plans for the future. Photo by Kevin Berne. 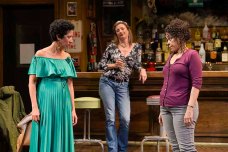 Cynthia (Tonye Patano) and ex-husband Brucie (Chiké Johnson) wonder if they can still make it work. Photo by Kevin Berne. 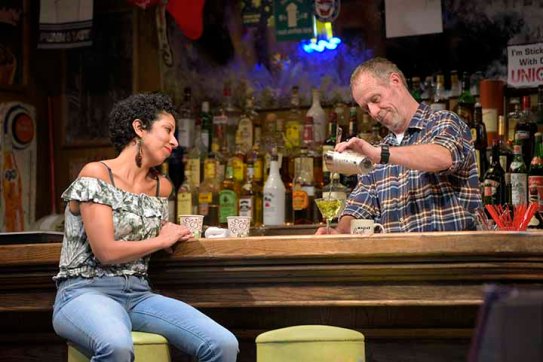 Unfortunately, this play suffers from an absurd amount of tonal whiplash that keeps renders any emotional impact moot. There’s no doubt that this play is a tragedy, but its attempts to alleviate the tension with comedy don’t work. I kept hearing the audience around me laugh at the dialogue (which I also heard screeching from the assisted listening devices of the aforementioned couple behind me), but not a single joke worked for me. When Tracey’s antagony toward Cynthia is at its height, Tracey recalls better times the two had during a trip to Atlantic City. The anecdote comes out of nowhere – hell, it seems to come from an entirely different play – and tells us nothing about these characters that we don’t already know.

What’s more, the 2008 sequences serve no purpose at all. The story proper takes place from January – November of 2000. Act I’s prelude takes place in September 2008, with Act II bookended by two scenes in October 2008. They serves little purpose other than tell the audience “here’s where four of these characters wound up eight years after,” not all of which makes sense. Worse yet, the play just stops. It doesn’t end, it just stops. Just like that. No real conclusions or resolutions, just the sort of ending that makes me think Nottage just threw up her hands in frustration and called it a day.

I’d at least like to tell you that the flaws in the script are made up for by the production value, but that’s only half true. All of the performances fall flat. If you’ve ever seen a gospel play, then you have an idea of what’s going on in this show. Of the cast, I can only recall seeing “Oscar” actor Jed Pesario before. He’s a good actor, but he and the rest of the cast seem to have been instructed to deliver all of their lines “loud” rather than nuanced. Every word is delivered as if to makes sure it’s heard across the street, but not to mimic the cadence of human speech. There’s also some awkward staging and one of the worst-choreographed fight scenes I’ve seen in quite some time.

On the other hand, Andrew Boyce’s set is a marvel of nuance and intricacy. When we first see Stan’s bar in Act I, I was struck not only by the detail of the dive (I’ve seen those booth cushions a million times), but also by brick exterior seen far-right. This section is occasionally pushed more center to have outdoor conversations; the addition of an extra keg is a great touch. The roof of the bar features a similar brick exterior, with Hana S. Kim’s projection screens creating billboards and the timestamps (not even one of the projectors glitching opening night took away from the experience).

Ulises Alcala’s costumes are great in their detailed simplicity. This is a blue-collar town and these are blue-collar characters; they dress for practicality, not couture. Even so, little details like Brucie’s ragged clothes and one character’s maid uniform tell stories unto themselves. Sound designer Jake Rodriguez’s work doesn’t have anything have anything flamboyant here – mostly recorded political speeches and Marc Anthony’s “I Need to Know” on the jukebox – but this isn’t a show that calls for anything too big sound-wise.

All in all, great work on the tech-side. 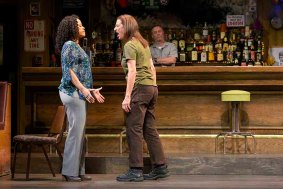 Cynthia (Tonye Patano) and Tracey (Lise Bruneau), once the best of friends, find themselves at odd when Cynthia is promoted. Stan (Rod Gnapp) watches the anger unfold. Photo by Kevin Berne.

Evan (Adrian Roberts) finds himself dealing with the aftermath of the action in the bar. Photo by Kevin Berne.

Chris (Kadeem Ali Harris) is terrified to wind up like his father, Brucie (Chiké Johnson), who has fallen on hard times. Photo by Kevin Berne.

Thanks to Oscar (Jed Parsario, right), Tracey (Lise Bruneau) discovers some disturbing info about the future of the factory. Photo by Kevin Berne.

Sweat yearns to be a show documenting the very divisions of race and class that seemed to be mending at the start of new millennium, but have only grown wider in subsequent years. At its best, it shows how even the strongest foundations – friendship, family, job security – can fall apart in the blink of an eye. At its worst, it’s a play that wants to say so much that it doesn’t bother to listen to what it’s actually said.

Unfortunately, its faults outweigh its strengths.

Sweat is scheduled to run until the 21st of October at the ACT’s Geary Theatre in San Francisco.
The show runs roughly 2 ½ hours with a single 15-min. intermission.
For tickets and information, please visit the production’s official site here.

Other links of mine