“I’m not a racist. I am the least racist person you have ever interviewed, that I can tell you.”
– Donald Trump, after referring to non-White nations as “shithole countries”

*I saw Stuck during the opening night of the 2018 SF Indie Film Festival.

Hey, kids! Say, have you ever wanted to see a musical that took the half-assed, hypocritical social commentary of Crash, set it to songs that all feel like rejects from Rent, and then exploited sexual assault just in time for the rise of the #MeToo movement?

Well, too bad, ‘cause one exists.

Having never been to the SF Indie Fest before – you live your whole life in this city and you never do something ‘til you win a free ticket – I would have been fine with the first film I saw being bad. Hell, indie films are just as much of a mixed bag as their mainstream counterparts. But never in all my days would I have thought I’d see something that would make me write “Fuck! This! Movie!!!” in my notebook as I followed along. If this is the festival’s Opening Night entry, I shudder to think what else they’ve got in store.

There’s no reason for these six random New Yorkers to have ever met. But when their subway train is stopped due to a “police emergency,” they suddenly find themselves locked together with no one to talk to, except each other.

All they know is what they can see. Over the course of their time together, they’ll learn more about each other – and themselves – than they ever thought possible.

A theatre colleague of mine is part of a comedy musical act called McPuzo & Trotsky. If you ever have the chance, I gladly suggest you check out their gut-busting work. One particular song of theirs (which, sadly, is not to be found online anymore) hilariously eviscerates the clichéd American musical: the telegraphed romances; the flimsy conflicts; the non-conflicts; and the way everything is resolved at the end through a not-too-complex musical number (the way they skewer the common “uplifting multi-ethnic chorus” is my favorite part).

I gotta wonder if the creators of Stuck saw M&T perform that song, but decided to play the material completely straight? It would definitely explain the paint-by-numbers approach to the story and music. Every musical number, which struggles to fit organically into the narrative, sounds like the sort of thing a beginning composer would write before throwing away. Some of the music sounds outright plagiarized, with a “tapping sounds” tune lifted from Bring in ‘da Noise, Bring in ‘da Funk, and the following tune sounding almost exactly like Ray Charles’ “Hit the Road, Jack”.

Oh, but what of the characters singing these songs? I couldn’t tell you because there aren’t any. Like Crash, this story reduces its cast to a collection of stereotypes rather than character traits. Everyone here is merely the sum of their biases (which make no sense when said aloud – which is often) and their tragedies. Only two characters – homeless Afro-Latino Lloyd (Giancarlo Esposito) and creepy White hipster Caleb (Gerard Canonico) – are ever addressed by name, and once they begin ranting about what they hate about each other, there’s no reason for them to ever become friendly later. This story isn’t interested in exploring the complexities of racism, sexism, or classicism, it just brushes them aside with a simple “If people actually spoke to one another, there’d be no hatred in the world.”

I can deal with a story that expresses a different world view than my own, but I won’t tolerate a story that talks down to me. 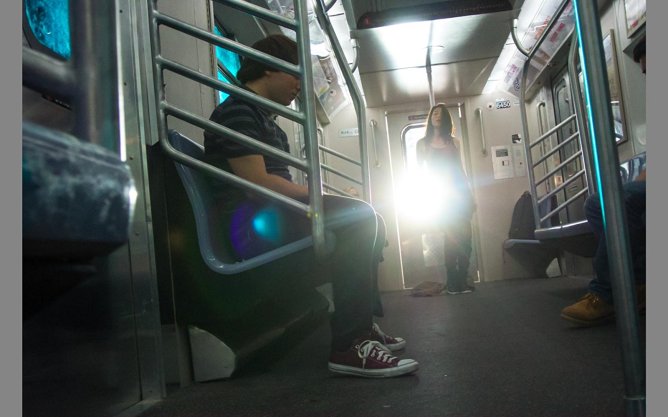 And I haven’t even gotten into exploitative misogyny of this film. It’s one thing for the film to have an explicit Pro-Life message, but the decision is taken away from the Black woman who is pregnant and ultimately made by the elder White woman and Latin man – the pregnant Black woman ultimately loses agency over her own body. Speaking of women losing agency over their bodies: this story puts forth the idea that women who are the victim of sexual assault should simply get over it. I am not kidding.

Before the story proper begins, the unnamed (on screen) Asian dancer played by Arden Cho has been practically stalked by creepy hipster Caleb at her dance studio. She finally confronts him about it in a scene that recounts her brutal and bloody rape (which we have to watch) at the hands of stereotypical Latino gangsters. Naturally, such a trauma would make her cautious, especially around a creepy dude that’s been following her everywhere. But it’s she who is made to feel ashamed when aspiring artist Caleb reveals that he found her attractive and has been using her as the basis for sketches in his notepad.

Yeah… that totally makes up for it.

I’m hard-pressed to think of a film that drove me into this much of a blind rage. As I look over the paragraphs above, I see that I haven’t even mentioned its tv-style “cinematography” or the editor’s annoying habit of cutting every shot after two seconds. Even without its terrible script, Stuck fails on every level of fundamental filmmaking, and this is a flick that includes such worn out lines as “We’re more connected than ever, but we’re just farther apart.”

When that-guy-whom-I-quote-at-the-top took office, many assumed that the world of the arts would respond with work that threw a mirror up to the racial, sexual, and economic disparities of the world. Instead, we get this sort of watered-down milquetoast tripe telling us that discrimination isn’t something that may be embedded into us due to centuries of injustice; no, it’s just something that happens to us. That’s why it’s called “Stuck” just as the earlier film was called “Crash“: it implies that these are things that just happen.

And, like rape, we apparently all just need to move and let others invade our personal space whenever they please. Won’t that make the world better?

This story doesn’t have any answers for the institutionalized ills of the world, so it falls back on “Everyone has a story” and “Times are tough all over”. That’s not only hypocritical, it’s irresponsible.

Though Stuck has been running in festivals since April 2017, it has yet to receive an official wide release. No date for such a release has yet been announced.

I’m including this Lindsay Ellis video about the film Bright because it says more about discrimination in 45 min. that the above film did in 90.