Since I started reviewing plays again earlier this year, I’ve noticed a recurring trope in several recent Bay Area productions (I hesitate to call it a theme, though it may be a cliché at this point). Namely, it’s the number of recent productions that have wanted to talk about racism, but have nothing of substance to say about it. It’s an important topic and it’s encouraging that both the arts and the Bay Area – both of which have a checkered past with the topic – consider it important enough of a topic to warrant serious attention.

The problem is that its complexities are often reduced to oversimplified talking points that result in sitcom-like solutions of “Just love everybody, m’kay?” That’s how you get shows like the recent Hedge, Grandeur, and Shotgun’s The Events. These shows either engage it from a position of complete ignorance, dance around it, or horribly justify it under the pretense of condemning it.

Of course, a major problem with tackling a topic like racism in the arts is that it’s often told from the point-of-view of an artist of a different race – usually White. Neither Robin Lynn Rodriguez nor Han Ong are Black, but somehow thought they could capture the nuances of the Black experience with racism. In both cases, the results were mediocre and insulting. Though much about the human experience is universal, refusing to allow people of marginalized groups to speak for themselves – no matter how honorable your intentions – is just another way of suppressing those marginalized voices.

That’s why I’m always on the lookout for works from that genuine POV. As I write this, I’m a few hours away from seeing Faultline Theater’s new racism satire How to Be a White Man, starring and co-written by a Black woman (local stand-up Luna Malbroux). And last night, I saw Christopher Chen’s new stripped-down racism drama, You Mean to Do Me Harm. If the former play is anything like the latter, it’ll be another great representation of being a PoC and having to deal with racism and delicate White sensibilities. 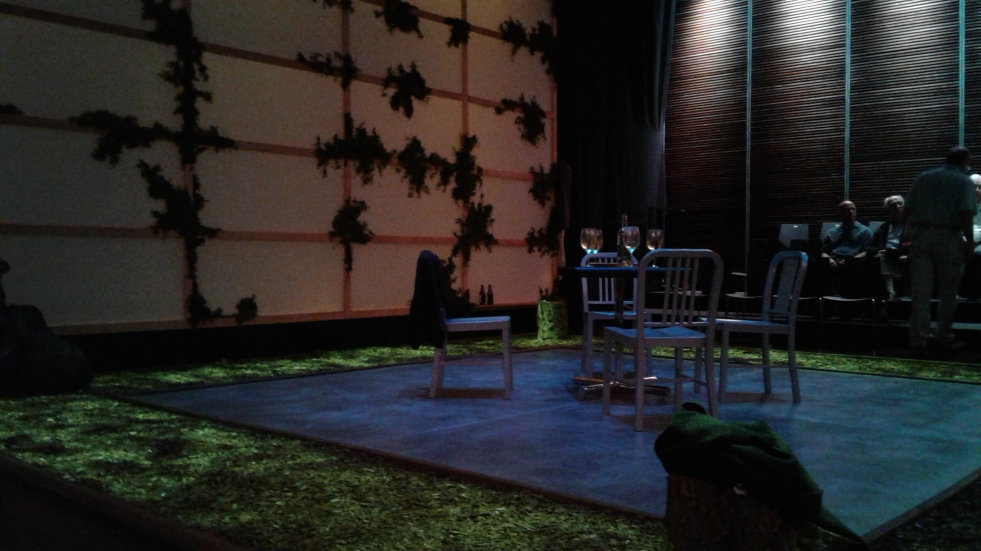 Set by Zoe Rosenfeld. Photo by Me.

Dan is an exec, married to corporate lawyer Lindsey. Ben, married to businesswoman Samantha, could soon working with Dan. In a perfect world, that would tell you all need to know about these two couples. However, Dan is a Chinese-born American married to White woman Lindsey, and Ben is a White man (with “experience” in China) married to Chinese-American Samantha. Further complicating matters is the fact that Lindsey and Ben used to date.

Decorum holds that they shouldn’t say what’s on all their minds, but it’s just a matter of time before off-hand comments lead to paranoia, past actions lead to current consequences, and political correctness is revealed as a cover for long-held biases.

The show begins with all of our characters gathered around a single table, sharing a bottle of wine. It’s been a long day, two of these folks are old friends, and everyone’s enjoying shooting the shit. Then a few casual comments – one about a camping trip Ben and Lindsey once took as a couple, the other about Dan’s failed Chinese search engine, which leads to a chat about Google vs. China – begin to slowly chip away at the foundations of the relationships. Before long, Dan is suspicious of Ben trying to rekindle his relationship with Lindsey, Ben suspects that Dan is trying to sabotage his employment prospects, and Sam wonders if Ben thinks of her as just a trophy wife.

And the best part of Chen’s script is the fact that all of the above suspicions are the current result of things the characters could – nay, should – have said before but didn’t. They let their feelings fester inside them for so long that they couldn’t help but have repercussions long afterward. For instance, the reason Ben is looking for a job is because Samantha was hired over him, and he’s long suspected that she exploited her status as a woman of color to get the position. Because why else would she get hired, right? But if she did exploit it, how is that any different from exploiting family connections for the same thing?

In Chen’s script – full of wonderfully naturalistic dialogue and sentence fragments – racism (and, for that matter, sexism) isn’t a straight line with a clear end-point; it’s a Möbius strip constantly twisting back, around, and into itself. 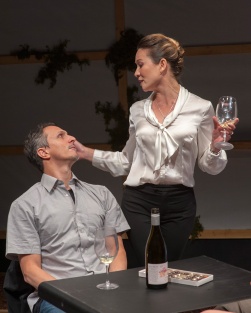 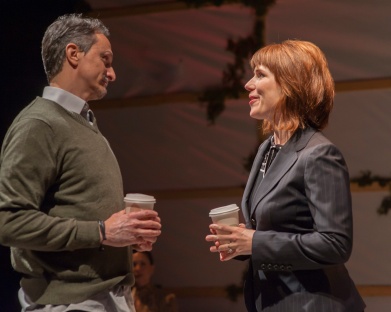 And as much as I dug the way Chen maturely addressed the Western emasculation of Asian men (which is called out by name, and reminded me of Arthur Schnitzler’s Traumnovelle – basis for the film Eyes Wide Shut), for my money, one of the most telling scenes comes when Lindsey reminisces about her honeymoon with Dan. She recalls an elderly couple giving the interracial couple dirty looks, which rubbed Dan the wrong way. For Lindsey, the fact that her husband would even bring up being on the receiving end of racism ruined the entire evening. Dan, no doubt the subject of such passive-aggressive racism all his life, can’t even recall that one particular incident. I’m hard-pressed to recall a dramatic work (except for maybe Get Out) that so accurately captured the differences between Whites and PoC in talking about racism. We’re used to open and subdued hostility, but mentioning it to Whites – to say nothing of calling them out on it – is a crime unto itself.

But for all the obvious differences between these characters, Chen is wise enough to also recognize their similarities – best represented through Samantha. When Dan runs into her over lunch and they get into a discussion about racism, Sam is mindful of the sexism she’s experienced from Chinese men. In fact, she sorta, kinda bonds with Lindsey over the idea of them both being working women. Of all four of these characters, Samantha is the minority of the group and is never allowed to forget it, whether she wants to or not.

It’s the sign of a writer not wanting to pay lip service to a serious topic, but to give its complexities the attention they deserve. If there was one scene – and one scene only – that was “iffy” for me, it’s a fantasy sequence near the end with Dan and Ben. Granted, that scene has the funniest line in the script (“This is your nightmare, isn’t it – to have your ass kicked by a one-armed hipster mountain-man?!”), I think the play could have done just as well without it. Otherwise, fine work by Chen.

And the writer was given a great crew with which to work. SF Playhouse artistic director Bill English guides the show a gentle-yet-assured hand. Everything is minimalist, which makes it more effective. Other than the opening scene, the four actors are never on the stage proper all at the same time. Resembling an Asian tea garden, the Zoe Rosenfeld-designed set features a border of bark along its square-shaped perimeter. When characters aren’t in the scene, English has them sit along these borders and watch the action with scrutinizing glares. Occasionally, those on the outside will look at one another or be seen by someone “inside”, aided by Wolfgang Wachalovsky’s lights. All very subtle, yet very effective. 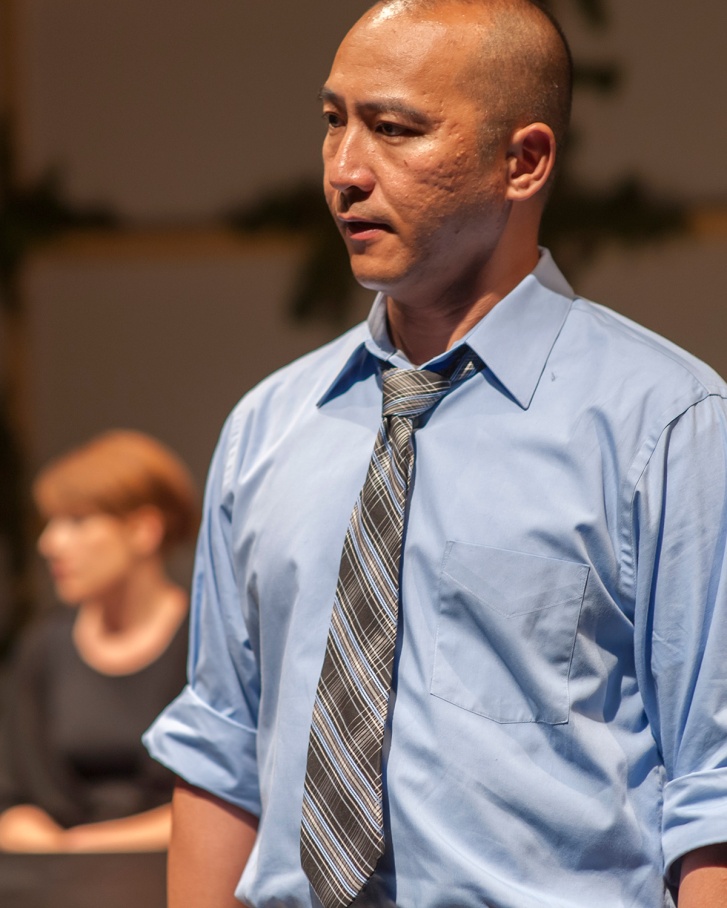 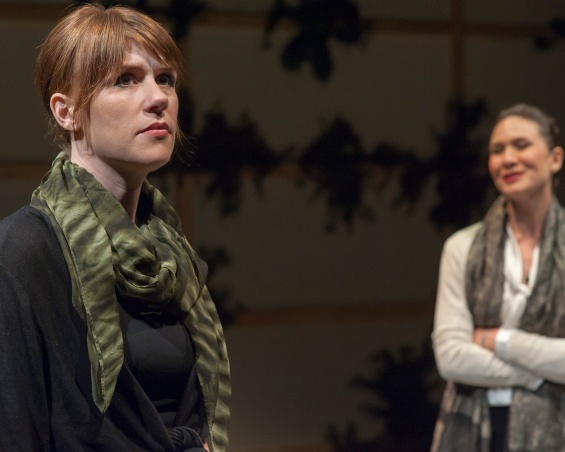 And then there’s the cast. Lauren English – the director’s daughter, whom I last saw in The Baltimore Waltz at The Magic – continues to be one of the Bay Area’s best actors, always doing best with moments of quiet inner struggle and contemplation. In spite of the aforementioned funniest line, the photos above seem to indicate that James Asher’s broken arm wasn’t originally written into the script. Nevertheless, he makes Ben equal parts charming and punchable. It’s easy to root for Don Castro’s Dan, but that doesn’t mean he’s anyway lacking in fault. And Charisse Loriaux’s Samantha verbally acknowledges not wanting to be the “Angry Asian Lady,” which is why watching the actress try to keep a lid on it (until she finally lets is loose) is so satisfying.

It’s not enough to simply want to talk about racism, you have to know what you’re talking about. And you can’t possibly assume you know the first-hand experience of someone else simply because their story appeals to you. You Mean to Do Me Harm is a story of Chinese, American, and Chinese-American perspectives on how racism doesn’t always manifest itself through a burning cross. Sometimes you find it deep down in your core, hidden in a place even you never thought to look.

You Mean to Do Me Harm is scheduled to run until the 1st of July at The Rueff Stage of The Strand Theater in downtown San Francisco.
The show runs 90 minutes with no intermission.
For tickets and information, please visit the production’s official site here.