It’s been over a decade since I last saw Mira Nair’s dramatic comedy Monsoon Wedding. I remember that I’d recently seen My Big Fat Greek Wedding and needed something to cleanse my mental palate. Whereas Nia Vardalos’ film was as grossly in-your-face as its small budget would allow, Nair’s film took a fly-on-the-wall approach. Whereas Vardalos reveled in stereotypes, Nair just let her characters be, eccentricities and all. One story was forced and clichéd, the other casually universal.

Having so much affinity for Nair’s film, I was apprehensive when first I heard that it was being made into a stage musical. Though such a move is nothing new, the success of the 2001 stage version of The Producers (based on Mel Brooks’ 1968 film comedy) opened the floodgates for film-to-stage (and sometimes back to film again) musical adaptations. From the more-well-known-bases for Hairspray and Spamalot to the indie films that led to musicals of High Fidelity and About a Boy, it seems that no film is safe from the inevitable stage-based sing-a-long. Hell, even Lord of the Rings, Spider-Man, and King Kong were commissioned stage musicals based on the successes each had as a film in the 2000s. So yeah… the idea of someone taking Nair’s film and turning it into Tony-bait didn’t inspire confidence within me.

Fortunately for all of us, the “someone” shepherding the film to the stage was none other than Nair herself. With a book written by the film’s screenwriter, and an Indian composer who knows a thing or two about stage/screen translations, it seemed as though the producers had found the perfect collection of artists to bring this new version to life.

Well… the musical version of Monsoon Wedding is not perfect, but everything it gets right is a joy to behold.

Aditi Verma and Hemant Rai are getting married. Not that they have much choice in the matter, as it was arranged by their parents. Though they’ve only known one another a short time and have lives of their own (and in Aditi’s case, a boyfriend who happens to be a married newscaster), there appears to be nothing they can do to stop the impending nuptials without disgracing both families.

And the members of those families have issues of their own. From Aditi’s cousin Ria being pressured not to become a spinster to wedding coordinator Dubey falling for the Verma family’s maid to the unsettling return of patriarch Tej, Aditi’s father Lalit just wants to make it through the ceremony in one piece.

As tensions rise, secrets are revealed, and relationships are changed forever, the news of an approaching storm pales in comparison to the wedding it may interrupt.

Let me start by giving my thoughts on the most important part of any musical: the music. It’s fantastic! Both Vishal Bhardwaj’s compositions and Susan Birkhead’s lyrics perfectly illuminate character motivations, advance the plot rather than slowing it down, and are incredibly catchy. There’s one song in the first act in which all of the women jokingly sing about the spark going out of their sex lives (“Long ago, I was hot/ Nowadays, I am not…”) that is both hilarious in its wording, but touching in its sincerity. Setting it all to a style of music most Americans know only from Bollywood (which is name-checked at one point) gives the show an identity in a sea of interchangeable Broadway hits. 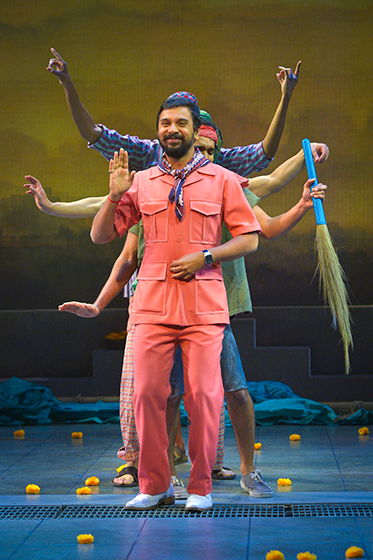 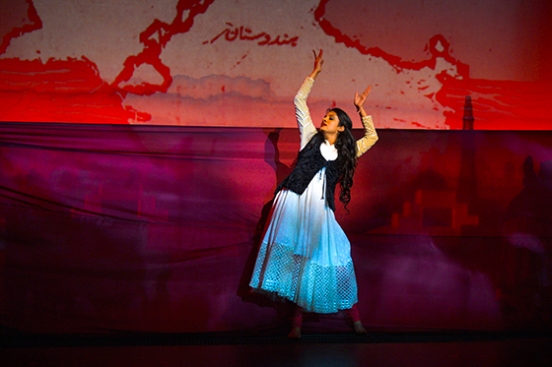 Equally good is the script by Sabrina Dhawan. The original film was shot in 2000 before going on to win the Venice Film Festival in August 2001. Since that time, you may have noticed that the western world has taken a toxic attitude towards people of Indian and Middle Eastern descent. Dhawan takes these changes to heart. There’s the subtle-but-omnipresent use of contemporary smartphones, but then there’s a brief conversation about travel. Hemant and his family have lived in the US for a long time. When he suggests that all of Verma’s come to the US, Lalit asks “Will they let us in?” An embarrassed Hemant replies “I apologize for… America”. As do we all, Hemant. As do we all.

So with all the musical has going for it and as great a time as I had, how can I possibly not give it my highest praise? Well… it actually pains me to say this, but the weakest contribution to the production comes from Mira Nair herself. I know that Nair started in theatre before moving on to film, but her theatre work was as an actress, not a director. That lack of staging experience is apparent in the staging of this play: there are several times when the “balance” of the stage is off by having most of the characters on only one side. There are also many times when actors who aren’t the focus are on the same plane – and sometimes share the same lighting – with those who are, which is distracting.

The weakest point of the show should be one of its strongest: Ria’s solo song in Act 2. It’s sung and acted well, but the song itself is the one that slows down the narrative and the characters just stand around. At times it seems as if Nair’s thinking was to just make sure the plot points were made – which they always were – and to not worry about anything else, such as background actors having “business”.

To Nair’s great credit and our enjoyment, when the show is firing on all cylinders, it does so masterfully. Highlights include Naani’s song at the top of Act 2, which best integrates Peter Nigrini’s eye-catching projection, Donald Holder’s lights, Lorin Latarro’s choreography, and Arjun Bhasin’s costumes, which in this sequence seem to be inspired by Sufi whirling dervishes. In praising the tech crew, I’d be remiss not to mention Mikiko Suzuki MacAdams’ backdrop of an Indian horizon, and how Scott Lehrer’s subtle background sounds add ambiance without overpowering the scene.

And then… there’s the cast. Whatever my criticisms above about how Nair stages the show, she has always known how to inspire captivating performances in her cast. I could spend all day pointing out each one, but let’s just say that whenever you hear someone say “There aren’t a lot of good Indian stage actors,” be sure to mention this production. Kuhoo Verma and Sharvari Deshpande became to favorites as Aditi and Ria, respectively. From Aditi’s inner dilemma to Ria’s inner turmoil due to the return of Uncle Tej (Alok Tewari), it was always a pleasure to see these ladies on stage. And one has to feel for Jaaved Jaaferi and Mahira Kakkar as Aditi’s parents, Lalit and Pimmi; they’ve spent so long planning for this one day, only to be hit with complications they never could have seen. But the undisputable show-stealer is Namit Das as PK Dubey, the wedding coordinator smitten by Alice (Anisha Nagarajan). Dubey’s adorable goofiness make you root for him during and past an hilarious sequence where he rides a horse past Alice’s train.

A great cast, one and all.

Usually when “ethnic” stories are brought to the mainstream (ie. White audiences), they’re done so with the detachment of a nature documentary. That’s because such stories are often created by and for people who aren’t from the group whose story is being told. With the stage musical of Monsoon Wedding, Mira Nair has once again done what she did with her film 16 years ago: she told the story of a specific family to show just universal such stories are. Though the way she told this story wasn’t entirely perfect, it was a story that only she could tell. And we’re all better off for having heard it.

Monsoon Wedding is scheduled to run until the 2nd of July at the Berkeley Rep.
It runs roughly 2 hours with a single 15-min. intermission.
For tickets and information, please visit the production’s official site here.