Lost in these ‘Woods’: ‘Into the Woods’ at SHN 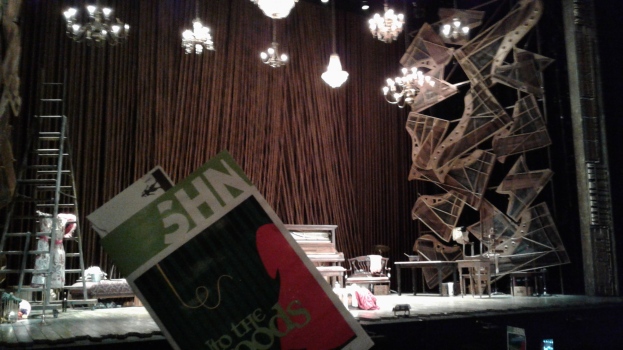 Sittin’ front row and my eyes still aren’t sure what they’re seeing.

“Enchantment produces a Secondary World, into which both designer and spectator can enter, to the satisfaction of their senses while they are inside; but in its purity it is artistic in desire and purpose.”
– JRR Tolkien, Tree and Leaf (1964)

It’s funny the way anyone who takes fairy tales in a “dark” direction is chastised for supposedly “deviating from the purity of the source material”. Usually the people who say “source material” actually mean “the Disney version,” as the most popular and repeated children’s stories in the West all have some very dark origins. Like religious parables, they’re trying to scare a sense of awareness (and obedience) into the listener; that means getting dark.

But even if they weren’t spawned from such malevolent origins, fairy tales deserve deconstruction as much as any other mythology or folklore. After each story’s heyday has long-since passed, subsequent generations would be remiss if they merely revered every classic text and took it at face value. James Lapine and Stephen Sondheim’s Into the Woods clearly has a love for the childhood tales – with songs that would fit in nice in a Disney production (which they did) – but isn’t afraid to take an adult look at what happens after “Happily ever after.”

Fiasco Theater’s production seeks to deconstruct the deconstruction. The results, to say the least, are mixed.

The Witch. The beanstalk. The red hood. The slipper. The charming prince. All of these and more come together in this mash-up of classic fairy tales. In what-appears-to-be the backstage of a theatre during the Great Depression, a troupe of 10 performers stage a bare-bones show for an audience (us) that may or may not actually exist.

There was something I noticed in the lobby of the Golden Gate Theatre on opening night of this production. And no, it wasn’t the fact that we all got free ice cream from Humphry Slocombe. Well, not just that.

Sometimes seeing theatre for free has its perks. 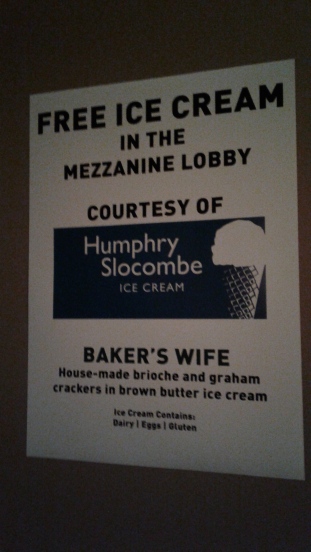 Sometimes seeing theatre for free has its perks.

It was the Into the Woods merchandise they were selling. It was what you’d expect: t-shirts; Lapine and Sondheim’s book; the original Broadway album; mugs; and fridge magnets. It also had DVDs (no Blu-Rays) of the film version. I’d imagine the brand would want to distance itself from such a lackluster adaptation, but maybe that’s why they were only selling the DVDs with little-to-no features on them.

I bring this up because this production is the polar opposite of the film in every way. I don’t just mean the obvious fact that it keeps what the film cut. No, I’m talking about the way the production regards itself. The film version took itself so damn seriously that you thought it was trying to win awards for pretention. The Fiasco Theater production doesn’t take itself seriously at all.

That works both for and against it. On the one hand, the producers have remembered what the film-makers instantly forgot: that the show, despite its serious moments, is a lot of fun (these are, after all, the stories we all grew up with). On the other hand, their insistence on abandoning the “subterfuge” of Lapine and Sondheim’s show can be a mess. The original show had actors doubling roles, but they were all specific to the multiple characters being played. This show eschews any one narrator, preferring to have the actors trade the role at any given time. An interesting concept, but it misses the point of him doubling as the Mysterious Man. Similarly, having Cinderella’s Prince double as one of the step-sisters to test himself with the slipper sounds better in concept than it looks in practice.

And then there’s the production’s attempts at being edgy. Again, both the original show and the original tales were pretty clear about the darkness and sexual commentary they were presenting. Apparently that wasn’t enough for Fiasco Theater. Sure, they hit the right note by showing the post-transformation Witch as very va-va-voomy, but they strike out in other parts. They want everyone to read the relationship between Jack and Milky White (here literally portrayed as a guy with a cowbell who screams “Moo” at the top of his lungs) as sexual. Not only sexual, but flat out gay… which means they might (emphasis on “might”) be equating homosexuality to bestiality.

Also, The Witch says “Fuck!”. Thanks for that, Fiasco. 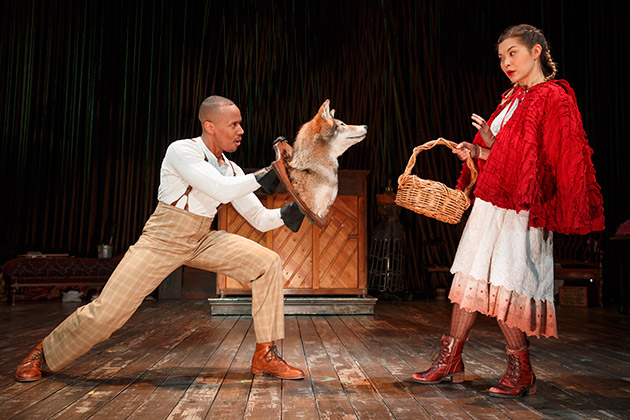 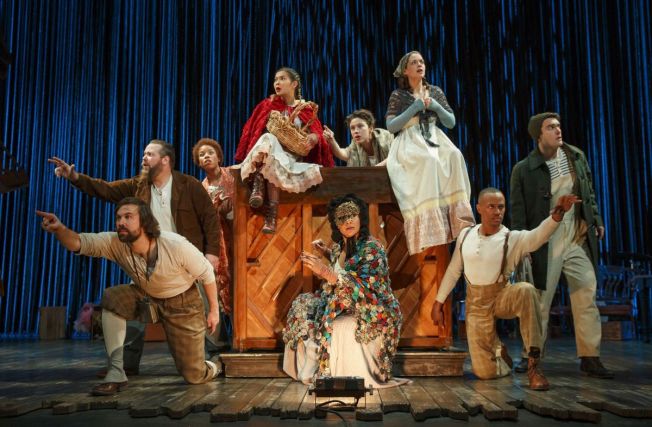 But one thing that can’t be taken away from the show is the amount of talent in the cast. Not only do they act, sing, and dance their roles, they also become their own on-stage “orchestra” in the form of Dust Bowl-era band. In addition to the pianist (the one performer constantly on stage, but never acting out a character), whatever actor isn’t currently acting is off to the side – but still in sight – playing the spoons, banjo, or whatever inanimate object they have that will make a sound.

As great as this showcases all of their skills, it still doesn’t explain why the show takes the form of a Depression-era acting troupe putting on a show for a (possibly) imaginary audience with almost no costuming. Is it their way of saying that a stage is less important than a willingness to perform? Is it their way of trying to see themselves in these classic stories? Is it a way of saying that the storyteller is always valuable, even when one has nothing? The synopsis on the official site tells us nothing, so we’re left to speculate.

All said, the Fiasco Theater’s production suggests that even an elaborate musical like Into the Woods can be put on with nothing more than pieces of cloth and string – something a theatre artist like myself finds comforting and encouraging. What the production seems to miss is why people like those bells and whistles in the first place. They aren’t just there to flaunt the production’s budget, Lapine and Sondheim added them so that you were 100% sure you were seeing the classic characters you knew and loved. That’s why the curveballs they throw at the characters have such resonance: it up-ends everything we thought we knew about stories we know by heart.

Kudos to the producers for getting permission to experiment. If anything, the result is a bold failure.

Into the Woods’ 2017 tour runs until April 2 at the Golden Gate Theatre in San Francisco before moving to Los Angeles.
For tickets and info about the San Francisco run, please visit the SHN site here.
For further information about the tour, visit the official site here.