“Civilized men are more discourteous than savages because they know they can be impolite without having their skulls split, as a general thing.”
– Robert E. Howard, “The Tower of The Elephant”, 1933

We’re the country that gave the world Jerry Springer. Can you tell?

The term “first-world problems” is thrown around a lot these days. It is a term a sobering as it is condescending. Sobering because the problem of whether or not your latte has chocolate flakes doesn’t really seem all that important compared to the thought of whether a little girl will accidentally step on a landmine on her way to school. Condescending because when you’re living day-to-day and not entirely sure where you’ll sleep once your landlord inevitably evokes the Ellis Act and evicts you, well then the temporary comfort brought upon by an overpriced caffeinated beverage seems like a Godsend. (I wouldn’t know; I don’t drink coffee.)

But even amongst members of the first-world fraternity, we Americans are regarded as cry-babies. For a nation that consumes a major portion of the world’s resources, we’re seen as constantly whining that’ll it’ll be “unjustly” taken away: our guns, our large meals, our exclusive access to marriage, health care, and education. We’re thought of as that spoiled kid that throws a tantrum if he doesn’t get the latest, most expensive toys, but refuses to share the toys with anyone else on the playground.

So what’s the world’s richest nation to do when it’s known more for throwing tantrums than solving real problems? Why, you wear that immaturity as a badge of honour, ofcourse. Why bring everyone down whilst simultaneously enlightening them with the story of Malala Yousafazi when the number one show on television stars something called Honey Boo-Boo? Why worry your pretty little head about Black youth being killed by “justified” White men when a lucrative Black film-maker like Tyler Perry is making money with films about how cheating women deserve to get HIV? And why would you ever care about someone filibustering for the rights of women’s bodies when you could be watching the video for “Blurred Lines”?

(No, I will not link to that fucking video. Here’s a Lorde song. You’re Welcome.)

So yeah, we hate being thought of as pigs, but we laud those who roll around in mud and shit. We don’t even trust those who consider themselves above such. No matter how much skill you might have, you haven’t really arrived until you’ve shown you can lower yourself to truly subpar standards. With that in mind, Tracy Letts won a Pulitzer Prize for writing a play about (supposedly) smart people acting like trailer trash. It was so popular, he got to make it into a film with Oscar winners. Because, in the words of Kevin Smith, “in Hollywood you just sort of fail upwards”.

Beverly Weston was once a great poet. That was a long time ago. Now he’s a man who spends each day trying to drink himself to death so that he doesn’t have to put up with the foul-mouthed rantings of his equally inebriated wife.

When Beverly goes missing, it brings their family – children, grand-children, siblings, and cousins – to the couple’s home in Osage County, Oklahoma. Over the next few days there are libations imbibed, secrets revealed, and obscenities thrown about ad nauseum. And as the warm August days roll on and the portrait of the Westons becomes clearer, the question soon becomes “Why didn’t Beverly try to get away sooner?”

I know it’s pretentious as hell to say that someone is “too good” for something. Just because it doesn’t meet your high-fallutin’ standards doesn’t mean you have to turn your nose up at someone else who enjoys it, do you? Well, what those defenders of the peanut gallery might not realise is that criticism is holding up a standard, and when that standard isn’t met, we have the right to call it out. Sure, a high standard minus a lack of diversity is snobbish, but so long as you are an active patron, you have the right to voice your opinion on the service for which you’ve paid. (And you all know I’ve got nothing against some good, unapologetic fun when I find it.)

What I’m getting at is this: every actor in this film is above this material. Every. Single. One. I’ll admit that I have neither read nor seen performed Letts’ award-winning play, but having seen this film, I have no interest in doing so. Perhaps there’s a level of brilliance that was lost in the translation to film, but with Letts adapting his own screenplay, I doubt what appears on screen was a great revision of his work (as was the case with Tennessee Williams, Craig Lucas, and countless others). 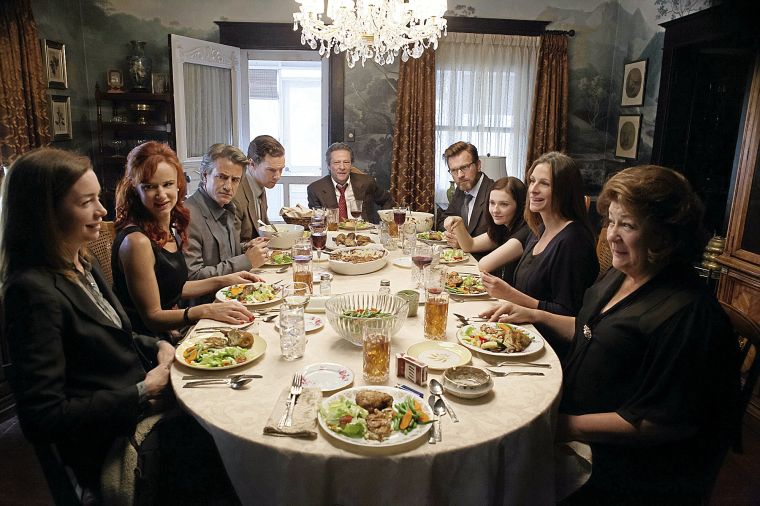 “A script reading by a Pulitzer-winner? Is it Wendy Wasserstein?”

Not helping matters is the uninspired direction and camerawork of director John Wells, a tv producer best known for his work on ER and The West Wing (post-Sorkin). Watching the film, I wrote in my notes how “tv-like” the simple credits and camerawork seemed at the very beginning. It didn’t improve as the film went on. And yet Letts’ overly-cliched script is the very sort of thing one would expect in the prime time soap operas on which Wells made his name.

But if the film has a genuine saving grace, it is the performances. Everyone here brings their “A” game and it is a sight to behold. The only thing more clichéd than the scenes in this script would be heaping praise upon Meryl Streep for once again proving to be one of the world’s greatest living actors. And yet, there’s a reason she constantly gets such praise. Here she disappears into the foul-mouthed skin of Violet Weston and uses her mannerisms to give her much more heart than the script would suggest. It’s a wonderful showcase of playing a larger-than-life character without scenery-chewing.

The entire powerhouse cast – Chris Cooper, Juliette Lewis, Benedict Cumberbatch, Ewan McGregor, Abigail Breslin, and Sam Shepard (to name a few) – make the most out of the pencil-thin caricatures they’ve been given. Even when they aren’t waiting to make the next big revelation (which they all do), they have fun with the time in-between. And I am NOT a fan of Julia Roberts at all – were I to make a list of undeserving Oscar-winners, her name would be right on the list next to James Cameron’s – but I gotta be honest: I liked her here. Who would have thought a tv producer would get her to create the sort of performance not even Spielberg or Soderbergh ever could?

A couple years ago I acted in a script written by my friend Sunil Patel. It was about the clichés of theatre. At one point me and actress/writer Ashley Cowan have a back-and-forth exchange in which she repeats the phrase “weepy monologue” and respond each time with “shocking revelation” – over and over again. That’s August: Osage County for you: it’s a never-ending series would-be shock value revelations trying to pass itself off as a quiet, intimate human drama. Even without its superstar pedigree, its pulp structure would find an audience. I personally was hoping for something a bit more refined (and less condescending) than this exercise in fluff.

*I saw August: Osage County at the AMC Metreon in San Francisco on Wednesday – 18 December 2013.